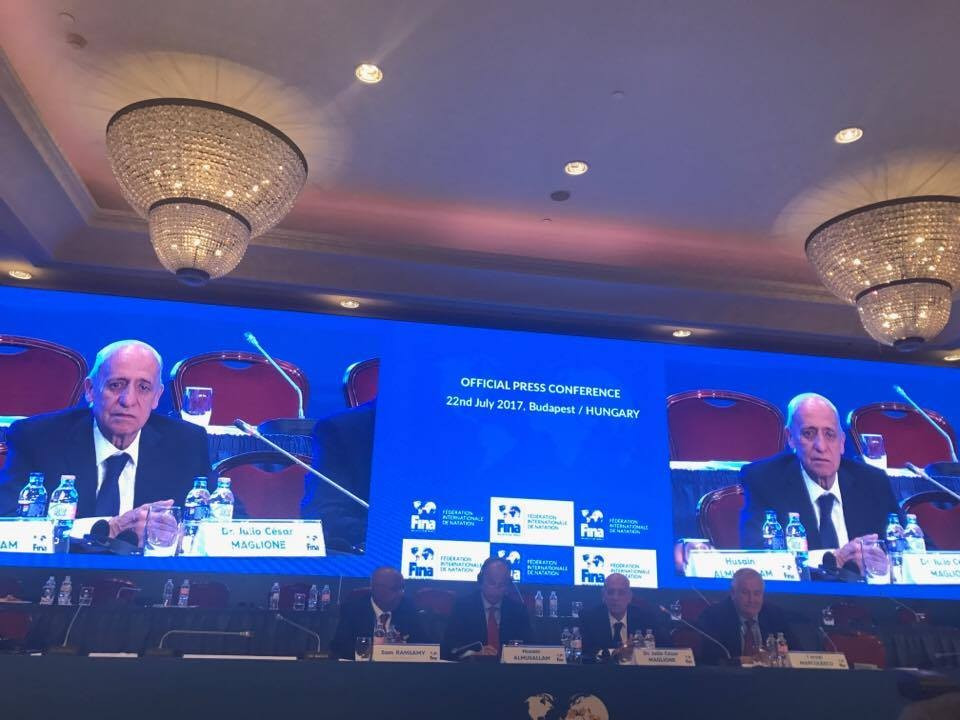 Julio Maglione has been re-elected President of the International Swimming Federation (FINA) in a landslide at a dramatic Congress here today.

He received 258 votes with Barelli getting only 77 out of an electorate of 176, each of whom manually cast two votes.

Maglione, first elected to replace Algeria's Mustapha Larfaoui in 2009, was only permitted to stand again after FINA extended term limits in 2015 and changed a statute requiring that all members of its ruling Bureau must be under 80.

There was near-unanimous support from Africa, Asia, Oceania and the Americas for Maglione.

He is now expected to stay in office for another four years until standing down shortly before his 86th birthday.

Kuwait's Husain Al-Musallam was appointed first vice-president at the end of a week in which he has denied wrongdoing following reports he requested a cut of sponsorship deals in his capacity as director general of the Olympic Council of Asia.

The election began with a lengthy debate over whether FINA Bureau candidates should each be allowed a brief presentation before the vote.

This proposal - made by delegates from Malta, Spain and Albania - led to a suggestion from FINA "independent" attorney François Carrard for a three-minute presentation window.

Tthis caused a chorus of opposition from delegates from Africa and Asia and received only 15 votes in support.

Given how the proposal was made by supporters of Barelli, it was an indication of the way the wind was blowing for the later ballot.

Barelli immediately marched up to the stage to request time to present.

This was rejected by Carrard, who reminded him that the Congress had already voted not to allow such interjections.

In farcical scenes, both Barelli and Maglione then asked to speak before being told "it is the same for both" by Carrard.

Critics have already claimed this shows a lack of transparency in a governing body dogged by recent criticism of governance standards.

It is worth remembering, though, that Barelli was involved in the banning of presentations from candidates during last year's LEN elections where he was returned as President.

He, as the incumbent, was still able to deliver campaign pledges in his address before the election.

As the FINA honorary secretary, a position abolished following this Congress, he was also responsible for helping draw up the agenda for the meeting and had never proposed presentations until today.

His opponents claimed he was acting politically rather than through a genuine desire to present.

Barelli has fiercely criticised the running of FINA and many of its leaders during a bitter election campaign.

Votes for at-large continental Bureau representatives were only contested for Asia and Europe.

In Asia, Zhou Jilong of China and Taha Al-Kishry of Oman were elected for the two roles after defeating Iran's Mohsen Rezvani.

The Netherlands’ Erik van Heijningen and Russian Swimming Federation President Vladimir Salnikov were re-elected to the two European spots despite now being backed by LEN or Barelli.

Germany’s Christa Thiel was beaten in the first round of voting before Royal Spanish Swimming Federation President Fernando Carpena withdrew midway through the second round vote.

Other Bureau members approved today include Mohamed Diop from Senegal, Mario Fernandes of Angola, Donald Rukare of Uganda and Zouheir El-Moufti of Morocco.

Margo Mountjoy from Canada was among representatives from the Americas along with Bahamas' Algernon Cargill, Paraguay's Jaun Carlos Orihuela Garcete and Barbados' Errol Clarke.

Other Asian members are Kazakhstan's Andrey Kryukov, vice-chairman but effective leader of Almaty's bid for the 2022 Winter Olympic and Paralympics, and Japan's Daichi Suzuki.

David Sparkes of Britain, Dimitris Diathesopoulos of Greece and Tamas Gyarfas of Hungary are other European representatives.

They are joined by Australia's Matthew Dunn representing Oceania.