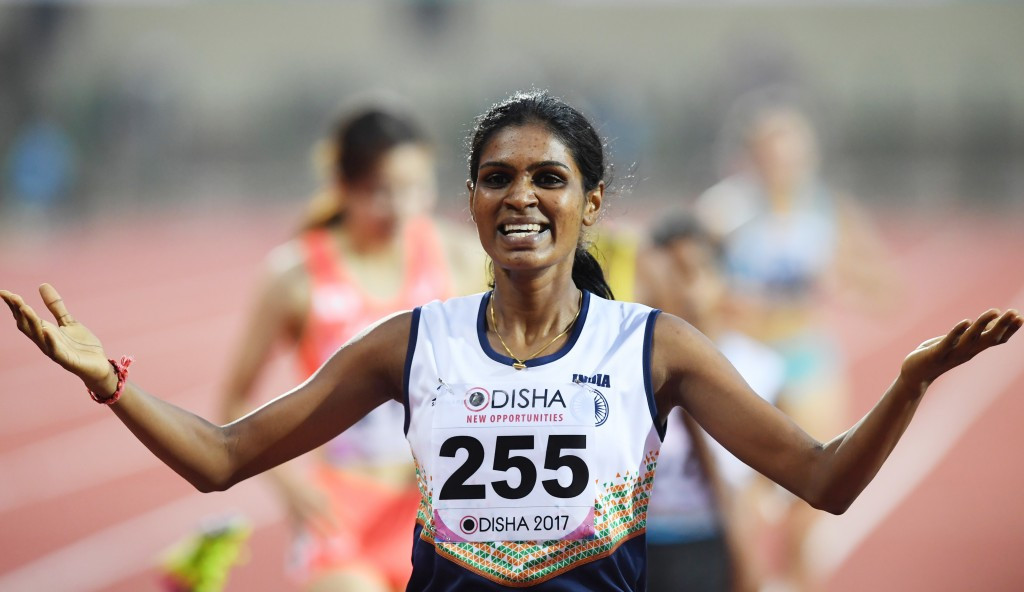 Sri Lanka's Nimali Waliwarsha Konda was crowned women's 800 metres champion after initial winner Archana Yadav of India was disqualified for infringement on a dramatic final day of the Asian Athletics Championships in Bhubaneswar.

Yadav had crossed the line in first place but Konda launched an appeal against the result as she felt she was pushed from behind during the conclusion of the race at the Kalinga Stadium.

The technical delegates upheld the appeal from the Sri Lankan runner, ensuring she was upgraded to the gold medal at the expense of her Indian rival.

Yadav finished the race in a personal best of 2min 2sec but was then stripped of her victory following the compliant from Konda, who clocked 2:05:23.

Despite the disappointing result, hosts India ended up with a haul of five gold medals on the final day to end the event comfortably at the summit of the medal table.

Viktoriya Zyabkina of Kazakhstan completed a hat-trick of track medals as she added the women's 200m crown to her 100m and 4x100m titles.

Swapna Burman gave the home crowd a gold medal to cheer on the last day of competition in the Indian city as she triumphed in the women's heptathlon with a score of 5,942 points.

Japan's Meg Hemphill was second on 5,883 points, while the hosts also clinched bronze thanks to Purnima Hembram's total of 5,798.

Indian Govindan Lakhsmanan wrapped up the 5,000m and 10,000m double as he won the latter race in a time of 29:55.87, leading home a one-two for his country as Gopi Thonkanal was second.

Adilet Kyshtakbekov of Kazakhstan did enough for the bronze medal.

Asian record holder Li Ling of China was stunned by compatriot Chen Qiaoling in the final of the women's high jump.

Chen produced a best effort of 4.40 metres, with Li, gold medallist in the event at the 2014 Asian Games in Incheon, forced to settle for silver on 4.20m.

Chayanusa Chomchuendee of Thailand was the recipient of the bronze medal.

World junior record holder javelin thrower Neeraj Chopra of India recovered from a difficult start to the competition by topping the podium with a best effort of 85.23m.

BA Ahmed of Qatar was second on 83.70m, with Davinder Singh of India taking bronze.

The final two Indian golds came in the men's and women's 4x400m relays.

India finished at the top of the medals table with a total of 29, 12 of which were gold.

China could only manage second with 20 medals, including eight gold.