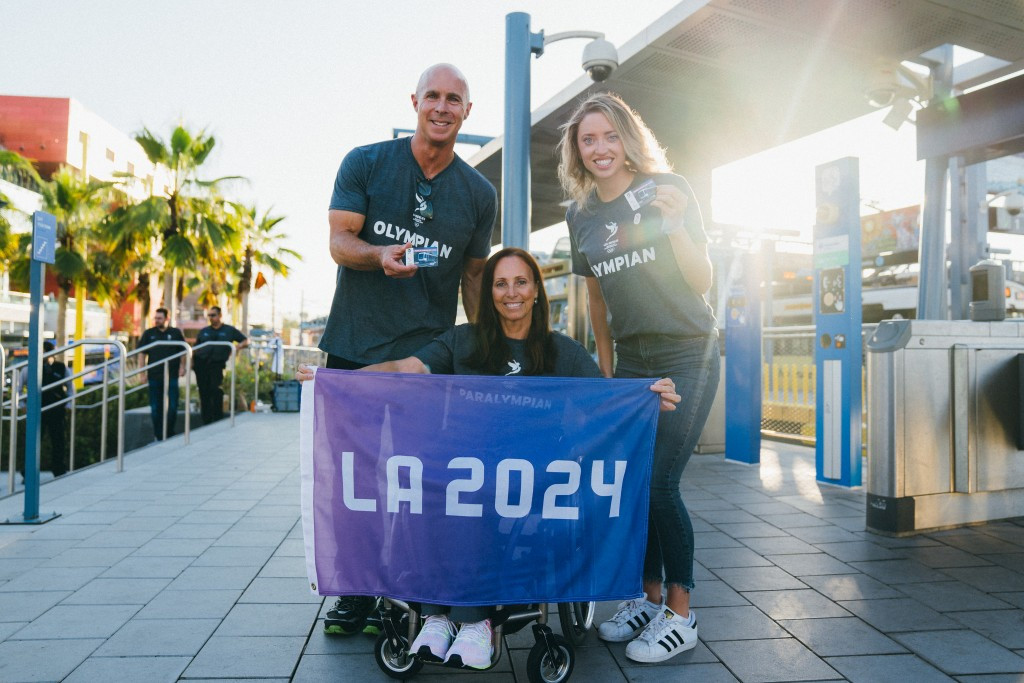 Souvenir TAP cards have been released by the Los Angeles County Metropolitan Transportation Authority (Metro) to celebrate the city's bid for the 2024 Olympic and Paralympic Games.

The limited edition cards are emblazoned with the "Ready to welcome the world" slogan and have been made available across Los Angeles' metro network.

They were distributed by Olympians and Paralympians from Los Angeles.

"Los Angeles has its sights set on the Olympic and Paralympic Games, and now, Metro riders can show their Olympic spirit every time they TAP," Mayor Eric Garcetti, who has been a prominent figure within the bid, said.

"When we say we're 'ready to welcome the world' it means we’re ready to harness our historic investments in mass transit, so that we can connect fans with Sports Parks quickly and affordably, and ease traffic congestion across the city, just like we did during the 1984 Games."

The TAP cards are available at number of metro stations located close to proposed Los Angeles 2024 venues, including the Memorial Coliseum and the Staples Center.

Los Angeles 2024 claim they will "contribute to the cultural shift towards mobility already underway in Los Angeles and create an ongoing legacy of increased transit ridership" by staging events close to metro stations.

The transport network in the city is set to undergo an extensive revamp to the tune of $120 billion (£93 billion/€105 billion).

This is separate to the region’s existing $40 billion (£31 billion/€35 billion) transportation investment over a 30-year period.

"Metro already has a large, robust transit network, and by 2024 we plan to add nearly 20 miles of new rail service to our system," said Metro chief executive Phillip A. Washington.

"These lines are already under construction today.

"We will be ready to transport spectators in a convenient, efficient manner with Metro’s interconnected transit system serving all Olympic and Paralympic sports venues."

Los Angeles claim to be currently focusing only on their 2024 bid race with sole rival Paris.

However, the International Olympic Committee (IOC) are due to rubber-stamp plans to also award the 2028 edition this year during an Extraordinary Session on Tuesday and Wednesday (July 11 and 12).

If this is confirmed, both events will be awarded to either Los Angeles and Paris at the IOC Session on September 13 in Lima.