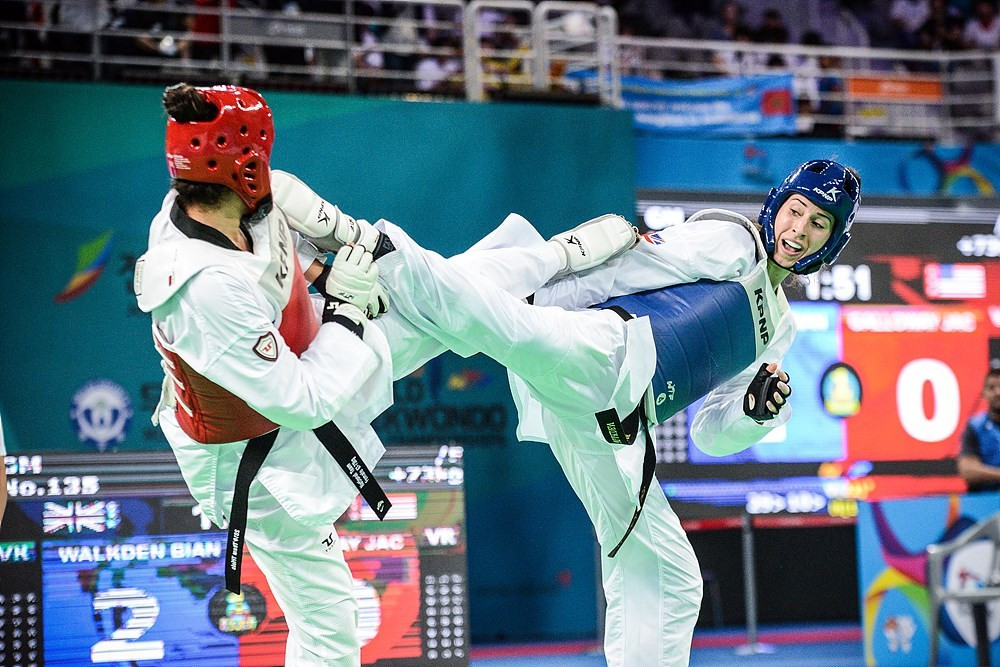 Walkden comfortably beat the United States’ Jackie Galloway 14-4 in the women’s over 73 kilograms final to retain the crown she won in Russian city Chelyabinsk two years ago.

The Rio 2016 Olympic bronze medallist reached the final by claiming a 9-3 semi-final win over home favourite Saebom An, who had to settle for a place on the third step of the podium.

"I am just so happy," Walkden said afterwards.

"I am buzzing and it definitely hasn't sunk in yet.

"I didn't think it would be that fluent if that makes sense.

"They were difficult opponents but I felt really composed.

"And my gamble has paid off.

"I took off my gold medal (from 2015) and treated this as though it was double or quits.

"And I came back with double."

Joining An in taking bronze was Rio 2016 gold medallist Zheng Shuyin of China after she lost 4-3 to Galloway in the other last-four encounter.

The 21-year-old, who was competing in his first World Championships, held off a late comeback from Russia’s Mikhail Artamonov to win the final 24-23.

He had earlier overcome top seed Carlos Navarro of Mexico 15-3 in the semi-finals.

"I really don't have much experience internationally, and in the few [events] that I went to last year, I didn't do so well," Jeong told Yonhap.

"This week, I wanted to make sure I had no regrets.

"I don't really believe people when they say something feels like a dream, but this victory does feel like a dream."

Artamonov registered a 25-15 win in his semi-final against Spain’s Jesus Tortosa Cabrera, who amassed 10 penalties and like Navarro ended up a bronze medallist.

The first title to be won tonight was that in the women’s 53kg category as Turkey’s Zeliha Agris defeated Russia’s Tatiana Kudashova 11-8 in a dramatic final.

Agris recovered from 6-3 down to take an 8-6 lead in the third period and although her opponent promptly restored parity, the Turk snatched victory with a three-point head kick in the last second of the match.

The 19-year-old reached the final after overturning a 5-1 deficit in the third period of her match with Uzbekistan’s Dinorahon Mamadibragimova to win 11-7.

Her gold medal comes just a day after Nur Tatar won Turkey’s first of the Championships with success in the women’s 67kg category.

Completing the women’s 53kg podium was Latvia’s Inese Tarvida, who lost 11-5 to Kudashova in the other semi-final.

Prior to completion of the three events, there was also preliminary-rounds action held today in the men’s 87kg, men’s over 87kg and women’s 73kg categories.

In the penultimate round of the men’s over 87kg, Gabon’s Anthony Obame will go up against Niger's Abdoul Issoufou before Britain’s Mahama Cho challenges Russia’s Roman Kuznetsov.

As for the women’s 73kg semi-finals, defending champion Oh Hye-ri of South Korea clashes with top seed Maria Espinoza of Mexico prior to the encounter between The Netherlands’ Reshmie Oogink and Serbia's Milica Mandic.

The finals in all three categories are due to follow tomorrow’s semi-finals.

Additionally, the preliminary rounds of the men’s 63kg and women’s 57kg divisions are also scheduled.