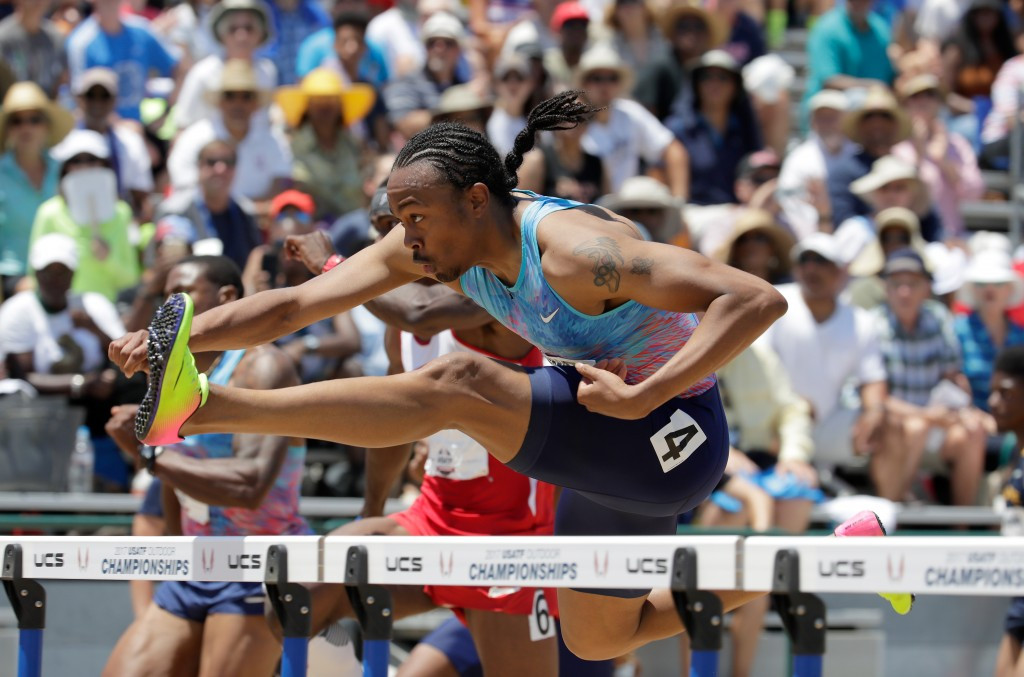 Aries Merritt, the 110 metres hurdles world record holder who underwent a kidney transplant a week after winning bronze at the 2015 International Association of Athletics Federations (IAAF) World Championships, will return to this year's version of the event in London in full health.

Merritt, who received the kidney from his sister LaToya, was second in 13.31sec behind Devon Allen in the final event of the four-day USA Track & Field World Championship Trials at Sacramento's Hornet Stadium.

"I always felt once I was healthy, all it would take is for me to put in the work," Merritt said.

"That’s something I've been lacking.

"I haven't been able to put in the work in two years."

Only the top three in each event earned a spot at the London World Championships, which will take place at the Olympic Stadium between August 4 and 13.

There was big disappointment for 19-year-old Noah Lyles, a surprise winner over 200m at last month’s IAAF Diamond League in Shanghai, as he failed to contest the final because of a minor injury.

"I wasn't able to run today but I know God still has big plans for me," tweeted Lyles, whose Shanghai time of 19.90 puts him third on this year's world list.

In his absence, Ameer Webb took the US title in 20.09, with Christian Coleman setting himself up for a 100/200m double in London by finishing second in 20.10, one place above Elijah Hall-Thompson, who clocked 20.21.

Hall-Thompson is coached by nine-time Olympic champion Carl Lewis at the University of Houston.

Former world and Olympic 400m champion LaShawn Merritt was another non-starter in the semi-final, but his participation in the heats enabled him to take up his wildcard as last year's IAAF Diamond Trophy winner in the 400m.

Ajee Wilson, racing the 800m for the first time in four months after her doping positive was examined and agreed by the US Anti-Doping Agency (USADA) to have been due to contaminated meat, earned her place in London with victory in 1:57.78, making her the third fastest woman this year behind Olympic champion Caster Semenya and Kenya’s Margaret Wambui.

Wilson was allowed back to racing after USADA announced that she would lose her indoor national 800m record of 1:58.27 on February 11 - after her sample showed up positive for the anabolic agent zeranol.

However, she was not banned after it was concluded she had eaten US meat, which contains this agent.

Charlene Lipsey took second place, in front of world 2013 bronze medallist Brenda Martinez, with this year's pacesetter Raevyn Rogers run out of it as she finished fourth in 2:00.18.

Olympic shot put champion Ryan Crouser won the title with a huge final effort of  22.65m, the best achieved this year, with Joe Kovacs - already assured of a place in London as defending champion - came second with 20.35 in a mighty contest that promises well for the British capital.

Olympic bronze medallist Torie Bowie earned third place in the 200m final in 22.60, with victory going to Deajah Stevens in 22.30 in front of Kimberley Duncan, who clocked 22.59.

Allyson Felix did not start the final, but has a wildcard entry to London at 400m.

Olympic 400m hurdles champion Dalilah Muhammad made no mistake in qualifying for this year's World Championships, winning in a personal best of 52.64 - the fastest time run since 2009 - which places her sixth on the all-time list.

Behind her Shamier Little clocked 52.75 and Kori Carter recorded 52.95.

This was the first time ever that three women have run under 53.00 in a single race.

Clayton Murphy's bid for an 800/1,500m double proved too ambitious as, a day after finishing 13th in the 1,500m, the 22-year-old Rio 2016 800m bronze medallist was unable to start the shorter final because of a hamstring problem.

Just as well, as the 31-year-old - who finished last in this month's Oslo meeting after hitting problems on the seventh hurdle - only managed seventh place in the final with a time of 48.91, one place in front of 2005 world champion Bershawn Jackson.