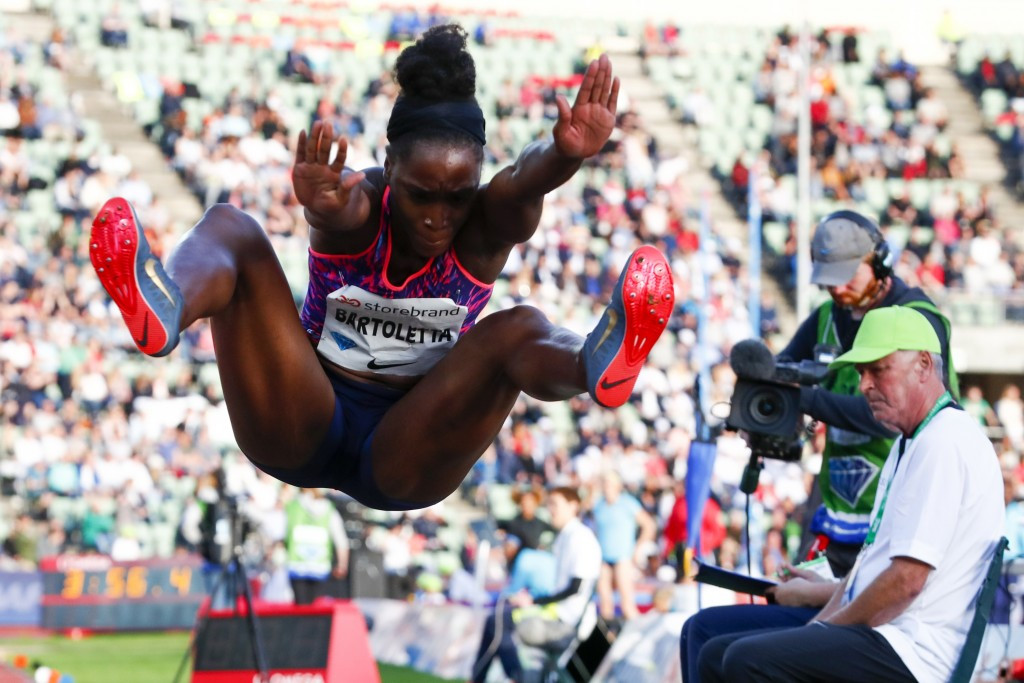 Bartoletta laid down a marker with a first jump of 7.01 metres - second furthest of the year behind Reese’s 7.13m in Chula Vista last weekend.

Reese responded with a third round effort of 6.80m, prompting Bartoletta to jump 7.01m for a second time.

In the fourth round, Shakeela Saunders got herself in between the two main contenders with a prodigious effort of 6.92m.

Reese responded immediately to reclaim second place with a fifth round of 6.98m, before finishing with 6.86m.

Bartoletta, however, produced a coup de theatre with a final round effort of 7.05m.

Olympic pole vault bronze medallist Sam Kendricks reached new heights as he saw off all opposition in his final.

After winning the event with a first time clearance of 5.80m, he boldly skipped 5.85m before a first-time clearance at 5.91m, just a centimetre below his outdoor best and a centimetre over the previous 2017 best achieved by South Africa’s Armand Duplantis on April 1.

The US Army Reserve second lieutenant then cleared 6.00m at the second attempt.

World 100m hurdles record holder Kendra Harrison, who failed to qualify for Rio 2016, made no mistake this time round as she won the final in 12.60sec from Olympic silver medallist Nia Ali, who clocked 12.68, and Christina Manning 12.70.

This time, however, she had the back-up of knowing she was already a wild card entry to London 2017 as the IAAF Diamond Trophy winner in her event.

Fred Kerley, whose 43.70 clocking for Texas A&M last month established him at seventh place in the all-time world 400m lists, secured his place at London by winning the final in 44.03.

Christian Coleman, already assured of a place in the 100m at this summer’s IAAF World Championships in London after finishing second in the 100m yesterday, took a big step towards a 200m place as he finished as second fastest qualifier for tomorrow’s semi-finals, in 20.34, behind Isiah Young’s 20.29.

Justin Gatlin, who beat Coleman to the 100m title by 0.03 seconds on Friday as he clocked 9.95, did not start in the longer sprint.

Other qualifiers included Noah Lyles, surprise winner of this season’s IAAF Diamond League meeting in Shanghai in 19.90, who ran 20.54, and Ameer Webb, who clocked 20.50.

Quanera Hayes won the women’s 400m final in 49.72, the fastest time yet seen in 2017, with Phyllis Francis also getting a sub-50sec time in 49.96 ahead of third-placed Kendall Ellis in 50.00 – which meant Natasha Hastings, the double 4x400m Olympic gold medallist, missed out after finishing fourth in 50.14.

Olympic 400m hurdles champion Kerron Clement, unexpectedly beaten at this month’s IAAF Diamond League meeting in Oslo by Norway’s 21-year-old Karsten Warholm after coming to grief at the seventh hurdle, showed he is back on track as he was top qualifier for tomorrow’s final in 48.61.