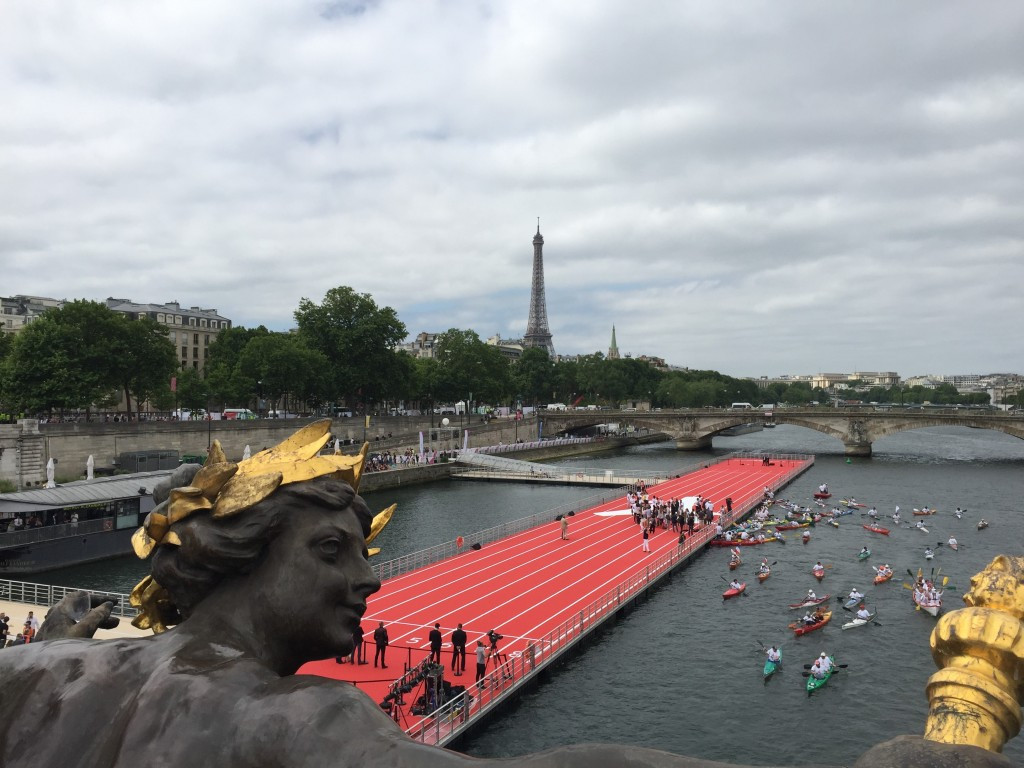 Paris 2024 co-chair Tony Estanguet has claimed the city's Olympic Day celebrations offer a glimpse into what the world could expect if they are awarded the Games.

To mark the occasion, the French capital has been transformed into a gigantic sports park for a two-day celebration, which started today and concludes tomorrow.

Stretching from the Eiffel Tower to Notre Dame along the River Seine, the sporting zone is offering the public a chance to sample more than 30 events.

A floating athletics track on the Seine, sports fields on the lawn of Les Invalides, trampolines in the Petit Palais, a high diving board on Pont Alexander III, a cycle track in Paris city centre and a climbing wall on the Pavillon de l'Arsenal are on display among other attractions.

"We are very excited by this Olympic Day," said Estanguet.

"We have worked a lot on this specific challenge to find a good balance of celebrating Olympic Day, but also showcasing the best of our project and giving a taste of what the Games in Paris in 2024 could look like.

"For me personally, it was a fantastic moment to cross Paris by canoe with many many people.

"We are very, very happy and if I look around me I can just see people enjoying the day.

"It is a great opportunity to engage with people and to share one of the pillars of our project which is celebration."

Olympic Day is dedicated to the founding of the international Olympic Movement by Pierre de Coubertin on June 23, 1894.

It aims to spread the ideals of the Olympic Movement and promote participation in sport across the globe regardless of age, gender or athletic ability.

Today's event began at 6.30am local time when up to 200 kayakers, led by triple Olympic canoe champion Estanguet, formed a giant flotilla that travelled along the Seine from the Stade de France.

The group's journey concluded at the floating athletics track where Estanguet and the Mayor of Paris, Anne Hidalgo, joined the President of the French National Olympic and Sports Committee, Denis Masseglia, to inaugurate the two days of activities.

Among the many attractions on offer here today was a pole vault exhibition from current French world record holder Renaud Lavillenie.

The London 2012 champion and Rio 2016 silver medallist was stationed alongside the River Seine and spoke of his delight at taking part in the event.

"I feel very proud because it is a very big event for us," said Lavillenie.

"It is a great opportunity to show the world that we can organise a big celebration.

"It is not often that you have the opportunity to jump next to the River Seine so for me it was very important that I take part in this."

The event is due to continue tomorrow where French President Emmanuel Macron will take part in some sporting activity.

Macron has very much give his backing to the Paris bid since his election in May.

He has already promised that he will travel to the Candidate City Briefing in Lausanne on July 11 and 12 to support the French capital's campaign.

Also on tomorrow's schedule, thousands of professional and amateur athletes will gather to take part in "2,024 kilometres for Paris".

The event involves cyclists at the Place de la Concorde, equestrian riders from Versailles and runners from each of the four corners of Paris converging on Les Invalides.

A decision on who will host the 2024 Olympic and Paralympic Games, which will see Paris go up against Los Angeles, is due to be made on September 13 at the International Olympic Committee's Session in Lima, Peru.