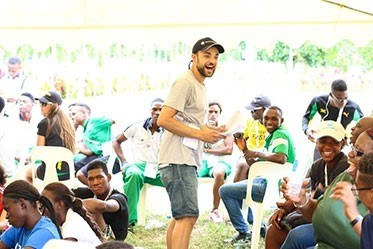 A programme of athlete engagement activities has been revealed for next month's Commonwealth Youth Games (CYG) in The Bahamas.

Described as "dynamic and inclusive", the programme will aim to provide support and inspiration to tackle the issues facing the next generation of global sporting citizens.

The Commonwealth Secretariat, RCS and UNICEF have worked closely with the CGF and The Bahamas 2017 Organising Committee in Nassau to deliver a series of fun and interactive workshops.

They cover topics including youth empowerment, integrity and personal values, youth participation in sport governance and how young role models can contribute to human rights and sustainable development.

The aim is to help young athletes and officials understand and explore how sport can be used to contribute to society and the rights of young people participating in and around sport.

The workshops will take place on rotation on the last three days of the Games, which are scheduled to take place from July 18 to 23.

Athletes and officials will be able to attend on an optional basis, with the workshops being delivered by representatives of UNICEF, RCS and the Commonwealth Youth Sport for Development and Peace (CYDSP) working group.

The CYDSP working group is a collaborative network of young sport and development leaders supported by the Commonwealth Secretariat and endorsed as the Commonwealth’s leading youth voice on Sport for Development and Peace.

The CYG Athlete Impact Labs are also an official part of The Bahamas 2017 Cultural and Personal Development Programme, striving to help fulfil the Games’ core ambition to strengthen the link between sporting competition, personal development and Commonwealth peace-building.

"Now more than ever, athletes are inspiring us on and off the field of play as global role models so we’re thrilled to be working with the Commonwealth Secretariat, RCS and UNICEF to engage, inspire and support our young Commonwealth athletes and young Caribbean hosts," Louise Martin, CGF President and chair of the Commonwealth Advisory Body on Sport, said.

"These CYG Athlete Impact Labs recognise and support our young athletes as essential to delivering on the Commonwealth’s values and achieving the UN sustainable development goals through sport."

Janine Thornhill, chair of the CYSDP working group, added: "This is a huge team effort as we join forces with our friends and colleagues at the RCS, UNICEF, Commonwealth Secretariat, the CGF and the local Organising Committee to use the Youth Games as a powerful sporting stage to connect with young people from every nation, culture and background.

"We look forward to meeting athletes and officials to support, inspire and learn more about the issues and opportunities facing young athletes across the Commonwealth.

"We all passionately believe that sport can be used as a tool for development and peace and the CYG Athlete Impact Labs are another example of the important role the Commonwealth Sports Movement can play promoting the Commonwealth and our shared values."

Launched in 2000 and now in their sixth edition, the Games are described as a "sustainable opportunity for smaller cities and nations to benefit from hosting a major sporting event, using predominantly pre-existing venues whilst also promoting an inclusive and positive youth and sustainable development agenda".

With 50 per cent of Commonwealth citizens aged 25 and under, it is claimed they play an important part in the Commonwealth’s mission to advance democracy, development and respect for diversity through sport.

The 2017 Games will be the largest international sporting event ever held in The Bahamas, bringing together more than 1,000 young athletes aged 14 to 18, who will represent their country and compete in nine sports over six days.