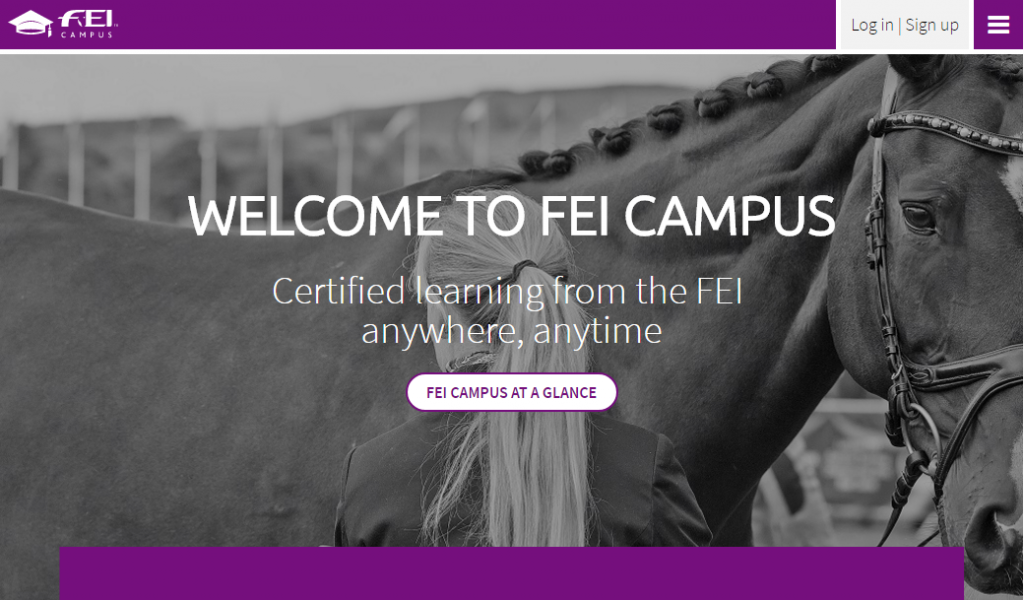 The International Equestrian Federation (FEI) has launched a new free e-learning gateway for fans of horses and equestrian sport across the globe.

FEI Campus, which can be accessed by clicking here, is an FEI Solidarity project.

The world governing body expects the online resource to become the virtual reference point for millions of equestrian fans globally, as well as athletes and FEI officials.

FEI Campus content and courses have been crafted by equestrian experts and are designed for everyone, including those looking for horse training and stable management tips and educational programmes on veterinary needs.

Information is also available on equine behaviour and judging certification.

The platform is designed to give the equestrian community an "immersive experience", with all courses and connection with tutors and peers possible from any device.

It is claimed FEI Campus will be constantly updated with up-to-the-minute and wide-ranging information to reflect the global interests of the rapidly growing international equestrian community, which now includes more than 41,000 athletes, 7,500 officials and 750 million fans around the world.

One of the key goals of the "unique" development tool is to make it less expensive for current and future FEI officials from around the world to get education, hopefully meaning that they will be able to follow courses without the costs of travelling and accommodation.

"We're connecting to millions of fans by sharing invaluable content on a sport and hobby we all love, and we're modernising the way we educate our officials and athletes with the natural efficiencies that come with e-learning."

He added: "We’ve focused on making strong, memorable and attention-grabbing content that is easily accessible for our international equestrian community that is always on the go.

"This is just the beginning for FEI Campus, with new information and courses being added throughout 2017 and beyond."

During April's FEI Sports Forum in Lausanne, Canada's Mark Samuel, the chairman of a working group on FEI officials, provided details of 13 concrete recommendations for equestrian.

This included a code of conduct and job descriptions for officials, the withdrawal of the age limit, online education for officials and course directors, appointments and remuneration, and a mentoring programme for younger officials.

De Vos hailed the discussions at the two-day forum as a "positive move forward".

A number of topics were on the agenda at the event, which was attended by more than 330 delegates at the International Institute for Management Development in the Olympic Capital.

Attendees and athletes expressed "overwhelming support" for the FEI Nations Cup Jumping series on day one, with London 2012 Olympic gold medallist Steve Guerdat of Switzerland one of the panellists.

The Series was described as "priority" number one by De Vos.

The debate focused on the current competition format, the number of qualifiers for the series, prize money, ranking points, the concentration of qualifiers in Europe and around the world, and the issues of cross-border transportation affecting some regions.

Welfare of equines and human athletes was top of the agenda on day two sessions centred on eventing risk management, endurance risk factors and bone fatigue.

The FEI claims it has "invested in substantial scientific research to evaluate risk factors and risk management" within the sport.