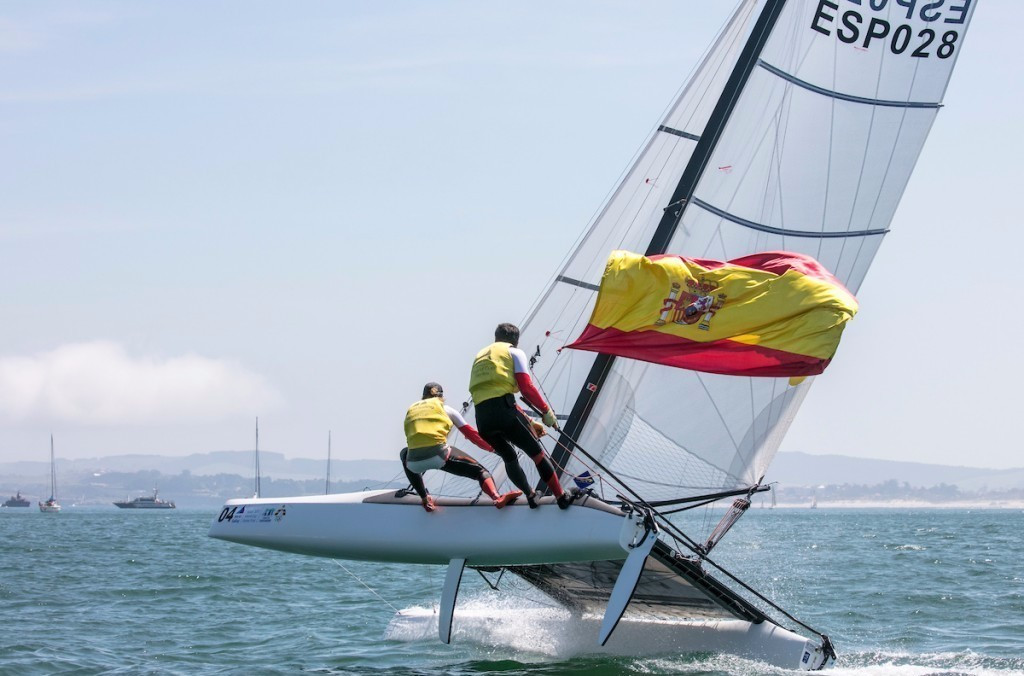 Racing concluded in six categories today, but action was delayed until this afternoon following a morning postponement.

The Spaniards finished outside of the top three just once this week with their worst result a fourth.

A top nine finish in the medal race would guarantee them gold and they sailed with relative ease, coming through in second.

"It's been fantastic,” said Echavarri, a Beijing 2008 Olympic gold medallist.

"It's not typical that we can sail at home with our families and everybody involved in our project around us.

"It's really emotional to be here and this win is for them.”

John Gimson and Anna Burnet of Great Britain followed behind to claim silver but the real drama came in the fight for third.

Another British pair, Ben Saxton and Katie Dabson, won the medal race to snatch the bronze from Italian duo Ruggero Tita and Caterina Marianna Banti, who could only manage seventh.

James Peters and Fynn Sterritt of Great Britain entered the medal race one point ahead of their rivals in the men's 49er.

Poland's Lukasz Przybytek and Pawel Kolodzinski were second with another British pair in Dylan Fletcher and Stu Bithell close behind.

Peters and Sterritt sailed consistently today, staying ahead of the Polish team before eventually coming through in second.

Przybytek and Kolodzinski finished in fifth, which was enough to seal silver.

Fletcher and Bithell followed in sixth to take bronze.

They entered the medal race three points ahead of Britain's Charlotte Dobson and Saskia Tidey.

A fourth for the Brazilians saw them claim gold while a sixth for Dobson and Tidey ensured British silver.

Lili Sebesi and Albane Dubois of France completed the podium.

Frenchman Nico Parlier was dominant in the kiteboarding all week long and confirmed gold with ease.

But Bridge still did enough to clinch silver.

Riccardo Leccese of Italy managed to climb into third after Britain's Guy Bridge was unable to finish two of the day's final series races.

Defending World Cup Series champion Kiran Badloe of The Netherlands had given himself a 16-point advantage over Louis Giard of France in the men's RS:X.

He took third today which was enough to secure the overall gold medal.

Brazil's Patricia Freitas had all but secured gold in the women's RS:X before today.

She held a 20-point lead before the medal race and only a disqualification could have seen her lose her grip.

Action is due to conclude tomorrow with the final medal races.