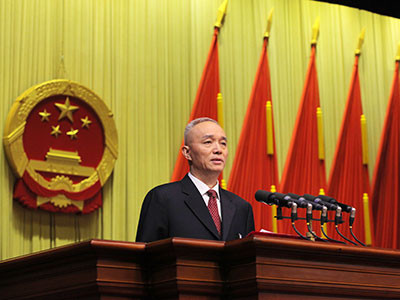 Cai Qi has replaced Guo Jinlong as President of the Organising Committee of the Beijing 2022 Winter Olympic and Paralympic Games, it was announced today.

The move to select Cai, the former Mayor of the Chinese capital and now Communist Party Secretary of Beijing, is one of several appointments made by the State Council.

An exact reason has not been given for the decision.

The 61-year-old, appointed as one of four Executive Presidents of Beijing 2022 earlier this year, will be tasked with spearheading preparations for the Winter Olympics and Paralympics in five years' time.

It is thought he has a close relationship with the country’s President Xi Jinping.

Cai's appointment was reported by Chinese news agency Xinhua and he is now listed as the President of the Organising Committee on the official website of Beijing 2022.

He became the acting Mayor last October following the removal of Wang Anshun, the leader of Beijing's successful bid for the Games.

Wang played a major role throughout the bidding phase in 2015, leading the Beijing 2022 delegation during the Evaluation Commission visit to the city, as well as during their presentation to the International Olympic Committee (IOC) in Lausanne.

He also played a major role at the IOC Session in Kuala Lumpur during July 2015 where Beijing beat Almaty by four votes.

Cai was officially confirmed as the Mayor at the fifth session of the Beijing Municipal People's Congress.

In January, he pledged to act on air pollution concerns in the capital.

Cai has previously served as the Mayor of the cities of Sanming, Quzhou and Hangzhou.

The change in leadership at Beijing 2022 comes on the eve of IOC Coordination Commission's second visit to the Chinese capital, due to begin on Sunday (June 11), where they inspect the Organising Committee's progress.

The entire visit of the Beijing 2022 Coordination Commission, led by Russian Olympic Committee President Alexander Zhukov, is scheduled to be held in the Chinese capital.

This differs from the previous inspection in October, where the visiting IOC officials also travelled to the two other competition zones in Yanqing and Zhangjiakou.

Yanqing, located around 88 kilometres from Beijing, is due to host alpine skiing, bobsleigh, skeleton and luge.

Zhangjiakou is a further 110km away from the Chinese capital and will stage snowboarding, freestyle skiing, cross-country skiing, ski jumping, Nordic combined and biathlon.

The Coordination Commission meetings are scheduled to conclude on Tuesday (June 13).