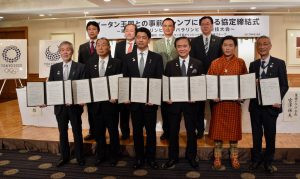 The Bhutan Olympic Committee (BOC) has signed a training camp agreement for Tokyo 2020.

Athletes from the small Asian nation penned a deal with the the Kanagawa Prefectural Government in Japanese city Yokohama.

Yokohama lies around 40 kilometres to the south of Tokyo.

Prince Jigyel Ugyen Wangchuck, President of the BOC, was in attendance as the deal was signed.

The member of Bhutan's Royal Family also visited Japan's Olympic Minister Tamayo Marukawa during his visit to the country.

"The agreement will help Bhutanese athletes train for the Tokyo 2020 Olympics and the Paralympic Games," a BOC statement said.

Bhutan has competed at every edition of the Summer Olympics since Los Angeles 1984 but are still awaiting their first medal.

Shooter Kunzang Lenchu did not advance from the qualification round in the women's 10 metre air rifle.