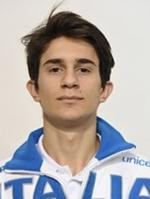 Dario Cavaliere of Italy moved through the preliminary rounds into the main draw on the opening day of the final International Fencing Federation (FIE) Sabre Grand Prix event of the season in Moscow.

He will now face compatriot Luigi Miracco in the round of 64.

The men's Olympic champion, Áron Szilágyi of Hungary, will play Siarhei Shachanin for a place in the round of 32.

The Belarusian made it through after beating Matteo Neri of Italy 15-11.

Vincent Anstett of France, the world number three, will go up against compatriot Remi Senegas.

The 23-year-old proved too strong for another Frenchman, Tom Seitz, as he won 15-11.

The event, which concludes on Sunday (June 4), will bring the FIE Grand Prix campaign to a close.

It will also be the last major test for competing athletes prior to the World Championships in the German city of Leipzig, scheduled to run from July 19 to 26.