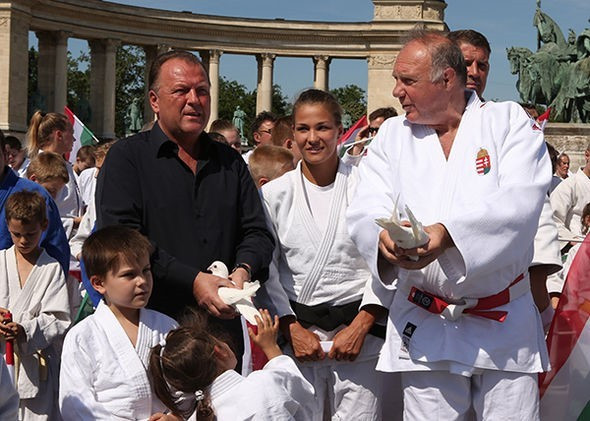 The International Judo Federation (IJF) have held a special event in Budapest to promote the sport’s upcoming World Championships.

The event, co-organised with the Hungarian Judo Association (MJSZ), saw around 1,000 judoka gather at Heroes Square in the heart of the city to launch 2,017 messages from the same amount of homing pigeons.

The 2,017 homing pigeons will carry messages written by local competitors of all ages across the country.

“Judo is my life” read one message, while another said: “Good luck and all the best for the World Championships."

The World Championships are due to be held between August 28 and September 3 in the city's László Papp Sportaréna.

World titles will be available in seven men's and seven women's weight divisions, while there will also be two team titles on offer.

Following the ceremony, Vizer addressed the crowd to promote "a special message of peace".

“Judo is more than a sport," he said.

"Judo is a martial art, an Olympic and Paralympic sport and a way of life, but also has the ability to develop societies and send a message of peace to the world.

"The values of judo are values for life and by spreading the ideals of Master Jigoro Kano.

"I hope we can we learn to live together with peace and mutual prosperity for all.

"Today, in all countries and regions, judo spreads a message for peace.”

Hungary's capital was chosen to host the World Judo Championships ahead of China, Mongolia and Qatar in March 2015.

Budapest has hosted successful events on the IJF Grand Prix circuit and also staged the European Championships in 2013.

The 2015 IJF World Championships were held in Kazakhstan's capital Astana.