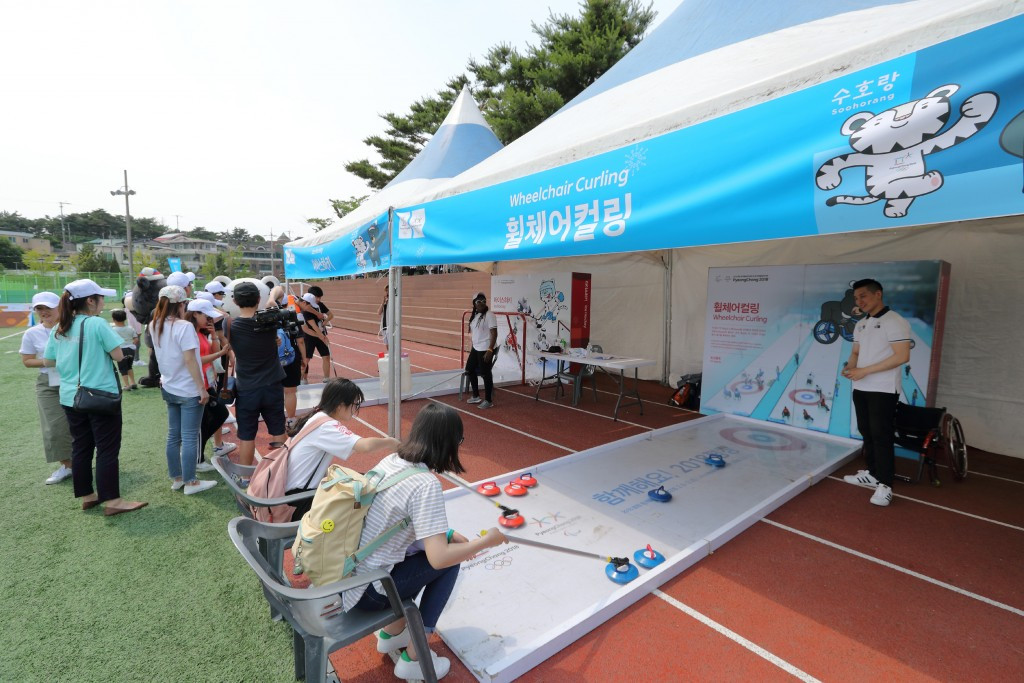 Participants at the Peace Education Festival in South Korea have been given the chance to experience Winter Olympic and Paralympic sports such as ice hockey, wheelchair curling and ski jumping.

The event, jointly organised by Pyeongchang 2018 and the Gangwon Provincial Office of Education, began yesterday and is due to conclude on Wednesday (May 31).

The festival is being held in Gangneung, the venue for ice sports at next year's Winter Olympic and Paralympic Games.

It began with a lecture introducing the Olympic and Paralympic values and Olympic Truce.

Students were then put into small groups to visit the six zones of the festival - sitting volleyball, boccia, hockey, five-a-side football, pipeline team-building and the Pyeongchang 2018 education zone - which has the tagline of "I Love Peace, I am a Peace Maker".

They were given the opportunity to sample ice hockey, wheelchair curling and ski jumping using Pyeongchang 2018's virtual reality technology.

Over 400 students and teachers from seven Asian countries - South Korea, Japan, China, Russia, Kazakhstan, Indonesia and The Philippines - were invited to participate at the festival, which also features cultural activities including language games and making traditional Korean items.

The objective of the four-day event is to support and educate youth to form meaningful discussions on how to make the world a more peaceful place and understand Olympic and Paralympic values through sports, according to Pyeongchang 2018.

"We hope that through the range of programmes and activities at our Peace Education Festival, the students from across Asia will not only get a chance to experience winter sports ahead of Pyeongchang 2018, but that they will also forge friendships through the values of sports and peace," Pyeongchang 2018 President Lee Hee-beom said.

Pyeongchang 2018 have also opened their first official store, where fans will be able to purchase merchandise relating to next year's event.

The shop is located on the ninth floor of the Lotte department store in Seoul.