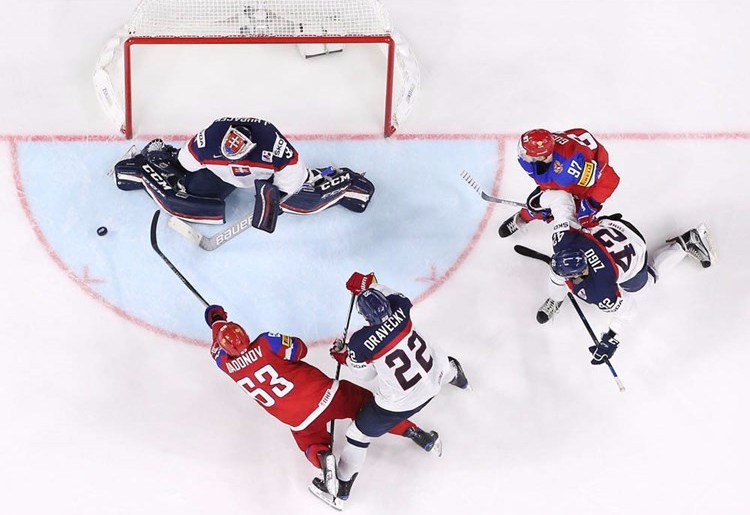 Russia have won their fifth consecutive match at the International Ice Hockey Federation (IIHF) Men's World Championships with a dominant 6-0 success over Slovakia.

The victory looked secure by the end of the first period as the Russians raced into a 3-0 lead at the LANXESS Arena in Cologne.

Yevgeni Dadonov opened the scoring just a minute in before he doubled his country's advantage after just 13 minutes.

Andrei Mironov then put the Russians three ahead before the sound of the first buzzer.

Vladislav Gavrikov then completed the rout when he scored the sixth goal of the match with five minutes remaining.

The United States came from behind twice to beat Latvia 5-3 in Cologne.

They trailed throughout the early stages of the contest but fought back to claim another pivotal win.

Teodors Blugers put the Europeans in front in the first period before Kaspars Daugavins doubled his country's advantage seven seconds into the second.

J.T Compher cut the deficit to 2-1 for the Americans but the Latvian two goal cushion was quickly restored through Oskars Cibulskis.

Nick Bjugstad pulled one back for the US to make it 3-2 before Johnny Gaudreau levelled the match with just over a minute to go in the second period.

Andrew Copp then put the US in front for the first time in the match before Dylan Larkin secured the 5-3 win with the final goal.

In this evening's match, Switzerland came from behind to beat Canada 3-2 in overtime in Paris with two goals from Fabrice Herzog.

The North Americans raced into a 2-0 lead in the first period through goals from Ryan O'Reilly and Mitch Marner.

The Swiss team were unable to reply until the third period, when they staged a phenomenal comeback.

Herzog pulled one back for Switzerland after 46 minutes before an equaliser from Vincent Praplan sent the crowd into raptures.

The match then went to overtime with Switzerland completing the comeback three minutes in when Herzog secured the victory.

There were also victories for Finland, Germany and Belarus today.

Finland defeated Norway 3-2 in Paris while Germany claimed a 4-1 win over Italy on home ice in Cologne.

The Belarussians claimed a 5-2 success over Slovenia in the French capital.