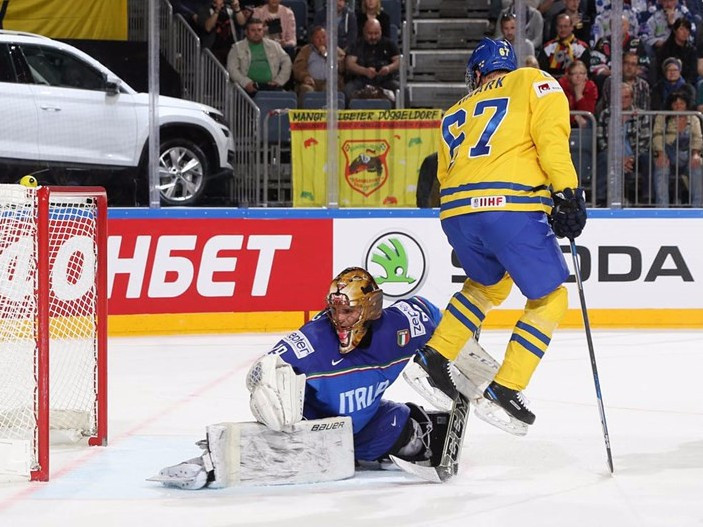 Eight different scorers were on target for Sweden as they crushed Italy 8-1 at the International Ice Hockey Federation (IIHF) Men's World Championships to put them second in the Group A standings.

The Swedes claimed their second consecutive win and third of the tournament at the LANXESS Arena in Cologne.

Victor Rask scored his second goal of the tournament to make it 1-0 inside three minutes.

After a period of continued pressure, Sweden doubled their lead after just eight minutes when Philip Holm fired home a rebound off the backboard.

When Sweden's Joel Lundqvist was sent off for tripping three-and-a-half minutes into the second period, Italy had several good chances and managed to convert one through Giovanni Morini to cut the deficit.

Sweden regained their two-goal lead as Jonas Brodin’s shot went through a crowd of players and into the net.

Just 41 seconds into the third period, Elias Lindholm scored his fifth of the tournament to make it 4-1.

"In the first two periods we had the puck a lot but the Italians did a great job keeping us outside,"  Swedish head coach Rikard Gronberg said.

"In the third period we finally got some goals as well."

The Czech Republic claimed their fourth consecutive win of the tournament after they overcame Slovenia 5-1 at the AccorHotels Arena in Paris.

Aiming to win a first medal at this tournament for five years, the Czechs had all but secured victory in the first period with three unanswered strikes.

Michal Repik opened the scoring after two minutes before two goals from Roman Horak put them 3-0 in front at the first buzzer.

Michal Kempny added a fourth in the second period before Slovenia finally got on the score sheet four minutes into the third through Miha Verlic.

Roman Cervenka completed the scoring when he added a fifth for the Czechs to cap off a dominant performance.

In this evening's matches, Denmark came from 2-0 down to score an overtime winner and beat Germany 3-2.

Goals in the early stages of the first period for both Patrick Reimer and Brooks Macek put the Germans in a seemingly comfortable position on home ice in Cologne.

Their European rivals levelled with two goals in quick succession from Frederik Storm and Morten Poulsen to level the match at the first buzzer.

Neither side were able to take the lead in the second and third periods, forcing the match to overtime.

Just over a minute in Denmark's Peter Regin completed the comeback and handed the Danes the 3-2 win.

In the other match this evening, in Paris, hosts France claimed a shootout win over Belarus.

France opened the scoring after 12 minutes through Sacha Treille before Damien Fleury doubled his country's lead in the opening stages of the second period.

Alexander Pavlovich pulled one back for Belarus while Yegor Sharangovich levelled the contest at 2-2.

Belarus then took the lead a minute into the third period after Alexander Kulakov scored a third but France were soon level when Pierre-Edouard Bellemare put them level.

Neither side were able to snatch victory in overtime but it was who prevailed after Stephane Da Costa scored the decisive penalty.