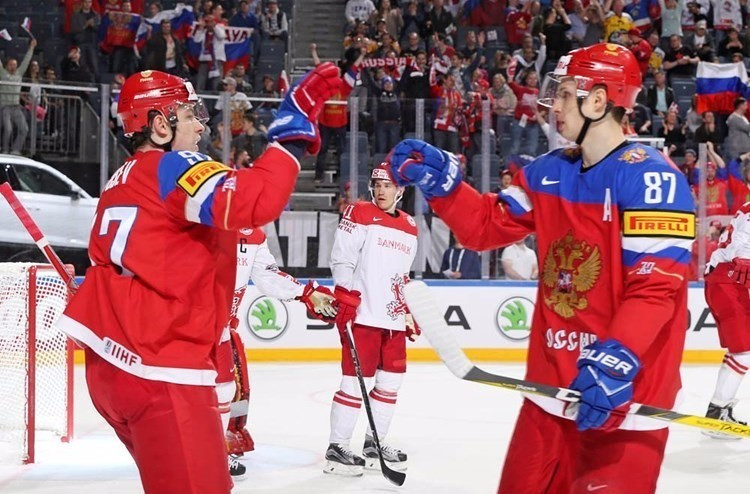 Russia claimed their fourth win from four matches at the International Ice Hockey Federation (IIHF) Men's World Championships to put them top of the Group A standings.

They defeated Denmark 3-0 at the LANXESS Arena in Cologne.

After a scoreless opening period, Russia scored three goals in the space of a minute and 10 seconds.

Bogdan Kiselevich scored first for Russia after 15 minutes of the second period.

Artemi Panarin found Kiselevich with a pass and he drove towards goal before firing a shot that went high past Danish goalkeeper George Sorenson.

"After we scored the first goal we got a jolt of energy and really showed our game," said Kiselevich.

"We started to play like we can and created good chances and got those quick goals."

In the second match of this afternoon's session, the Czech Republic scored an overtime winner to beat Norway 1-0 at the AccorHotels Arena in Paris.

It is the third straight win for the Czechs in Group B who are aiming to win a first medal at this tournament for five years.

After the Norwegians managed to frustrate their European rivals throughout normal time, David Pastrnak squared the puck from behind the goal line to Jan Kovar, who slid it into the net after three minutes of overtime.

"We had some chances, but we didn't create as many as we have in the past," said Voracek.

"We didn't create anything out of the corners.

"We didn't do much off the rush.

"You have to give them credit."

Canada made it four wins from their first four games after narrowly beating France 3-2 in Paris.

Ryan O'Reilly put the North Americans 1-0 in front after five minutes before Olivier Dame-Malka levelled the contest much to the delight of the Parisian crowd.

The French then took the lead after 21 minutes through Damien Fleury, but they could not hold out to the end of the second period as Claude Giroux equalised for Canada with just 49 seconds until the buzzer.

Marc-Edouard Vlasic then scored the winner for the Canadians two minutes into the third period, with the defending champions top of Group B.

Sweden were also victorious in Group A as they claimed a 2-0 win over Latvia in Cologne.

The Scandinavian nation claimed their second win of the tournament after goals from Gabriel Landeskog in the first period and Elias Lindholm in the third.