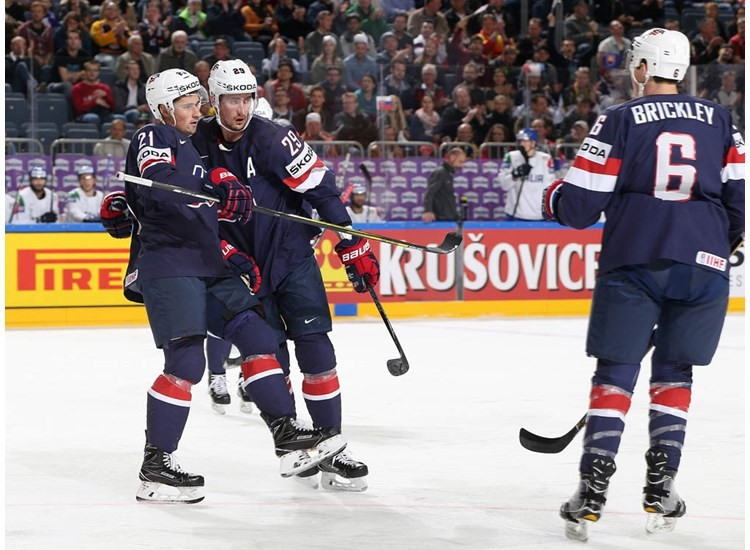 The Americans claimed a 3-0 success over Italy at the LANXESS Arena in Cologne.

Brock Nelson scored twice for the US and put them ahead after just six minutes, when he made the most of a defensive lapse.

Italy's Daniel Glira was far too casual when looking to play the puck from beyond his own goal line and the attempted clearance went straight to Nelson who rifled home a fierce shot.

Early in the second period, Nelson then overpowered Simon Kostner and set team-mate Dylan Larkin down the left channel.

Nelson continued his run and was perfectly placed to redirected Larkin’s pass inside the near post.

Soon afterwards the Americans added a third through Anders Lee to wrap up the victory.

American captain Connor Murphy was full of praise for Nelson at the end of the game.

"He's [Nelson] a skilled guy and he brings a lot to the national team," said Murphy.

"It might have been when we were in Prague, and he had some unbelievable plays.

"He's a natural player and a good team-mate.

"That's why we've had some success in the tournament, and Brock's been a big part of that."

Switzerland also recorded a 3-0 victory as they brushed aside Belarus at the AccorHotels Arena in Paris.

Reto Schappi, Andres Ambuhl and Cody Almond all scored for the Swiss as they bounced back from a devastating shoot-out defeat to France yesterday.

There were also victories for both Finland and Germany this evening.

Finland scored three times in the final period to beat Slovenia 5-2 at the AccorHotels Arena.

Sebastian Aho, Veli-Matti Savinainen, and Mikko Rantanen all provide a goal and an assist for Finland while Markus Hannikainen and Tommi Sallinen added singles.

Anze Kuralt and Rok Ticar were on the scoresheet for the Slovenians.

Germany came from two goals down to claim a shoot-out win against Slovakia at the LANXESS Arena.

Slovakia led 2-0 following goals from Tomas Matousek and Libor Hudacek, but the German comeback started when Patrick Reimer pulled one back.

They were soon level when Yasin Ehliz levelled the match up 27sec later.

Neither side were able to score again, forcing the contest into a shoot-out and it was Dominik Kahun who scored the decisive penalty to hand the Germans victory.