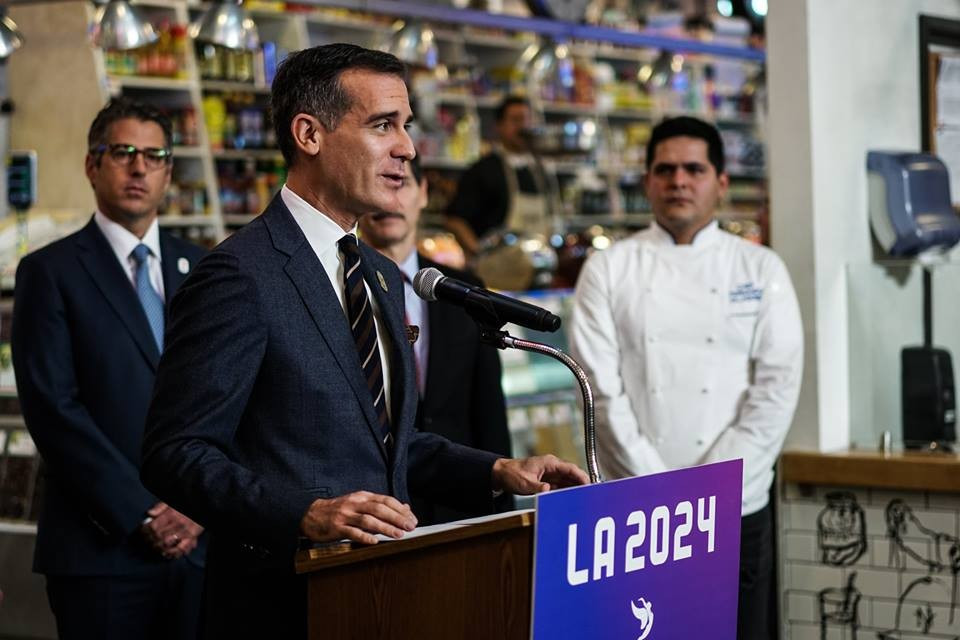 Los Angeles Mayor Eric Garcetti has backed plans to award the 2024 and 2028 Olympic and Paralympic Games together but claimed it would be better if his city went first.

A Working Group has been set-up by the International Olympic Committee (IOC) President Thomas Bach to investigate the possibility of awarding the two events at the same time.

It had been widely assumed this would see Paris awarded 2024 and Los Angeles 2028.

Garcetti, though, is confident that momentum is behind Los Angeles as the campaign enters a vital phase with the start of the IOC Evaluation Commission, headed by Patrick Baumann, here tomorrow.

"I absolutely believe in a scenario in which Paris or Los Angeles can have a stronger win in 2028 than in 2024," Garcetti told insidethegames.

"In some ways, if you think about your city then if you have more time and resources to invest than you can have a stronger legacy than someone who has to turn it around quicker.

"I think it really is an elegant solution and one that will inspire more cities to look at the Olympics.

"It also gives the Olympic Movement more time to think the overall bidding process, which while today is strong could absolutely be improved so people aren't spending millions of dollars each round with a whole lot of bidders and only one winner.

"That's not good for the Olympic Movement.

"To make one of the two us a loser in the upcoming vote really sets you backwards.

"Obviously, we still want 2024 and selflessly I think we should go in 2024 because it's the better for the Olympic Movement to show the sort of economically sustainable Games Los Angeles will be."

Los Angeles were not even the original choice of the United States Olympic Committee to be its nomination for the 2024 Olympics.

They were chosen in August 2015 after the first pick, Boston, were forced out following local opposition.

"We've come back up with a smile on our face and a 'can do' attitude.

"I think we've put together the best bid of any modern Games."

Paris remain the 2/5 favourites with the bookmakers in London to be awarded the 2024 Olympics at the IOC Session in Lima on September 13.

"I would say no-one has a majority of votes right now and I've always said, like any election, who cares what the figures are today?" Garcetti, elected for a second four-term as Los Angeles' Mayor in March, said.

"The only vote that matters is the final one.

"Up until that point we hope to win not just the minds over but the hearts of the IOC voters."

Garcetti is clearly frustrated by the strict rules imposed by the IOC so far on campaigning.

"I really really look forward to the conversation stage," he said.

"It's been like dating in a straight jacket where you can't really get to know one another."

Following this three-day visit, the IOC Evaluation Commission will travel to Paris and are then due to publish their report on July 5.

That will be followed by the IOC Technical Briefing in Lausanne on July 11 and 12, where a large number of members are expected to attend to hear presentations from Los Angeles and Paris.

"I think the more people hear about Los Angeles the more excited and comfortable they will feel awarding the Games to us," Garcetti told insidethegames.

"This is unlike any other campaign I have been in.

"Generally a political campaign is about really getting to feel who and what you are voting for and there hasn't been enough opportunities for that.

"So that's why these last few months will be very exciting.

"The more time I spend with these people the closer I feel to them and the closer I think they feel to Los Angeles."

Plans to award the 2024 and 2028 Olympics together, however, is expected to dominate the build-up to the final vote in Lima.

There now appears an acceptance that the two-award plan will come to fruition, it is just a matter or working out what the order will be.

"I think both cities understand the wisdom of this solution should it work out," Garcetti said.

"But neither of us are letting up or taking our foot off the pedal in any way.

"I think we have definitely deepened the support we have for 2024.