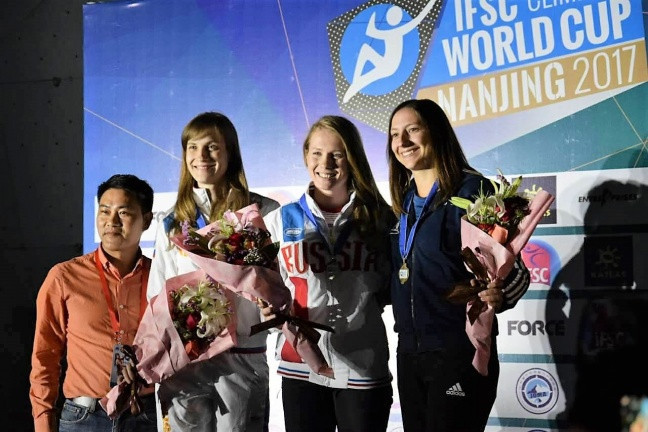 Rezi Alipourshena of Iran and Russia's Iuliia Kaplina set world records on their way to the men's and women's speed titles at the International Federation of Sport Climbing (IFSC) World Cup in Nanjing today.

The previous world record for the men was set at 5.60sec by Danyil Boldyrev of Ukraine at the IFSC World Championships in 2014.

Today, however, Alipourshena posted a time of 5.48 in his semi-final race against Bassa Mawem of France, who went on to finish fourth at the Shuimodanian Country Leisure Resort.

Alipourshena was victorious in front of two Russians.

Aleksandr Shikov took the silver medal while Vladislav Deulin, who led the overall standings before this weekend, was forced to settle for third.

The Russian produced a world record time en-route to claiming the women’s speed victory in Chongqing last week and beat her own record today as she proved too strong for the rest of the field once again.

Mariia Krasavina of Russia took second while third place was claimed by Anouck Jaubert of France.

She cemented her advantage following the first two events of the season.

Janja Garnbret of Slovenia finished in second place while Miho Nonaka of Japan, runner-up in the overall rankings last year, finished in third.

Keita Watabe of Japan proved too strong in the men's bouldering event as he finished in first place in front of his compatriot Tomoa Narasaki.

Narasaki finished top of yesterday's qualification standings but failed to maintain his level of performance in the latter stages today.