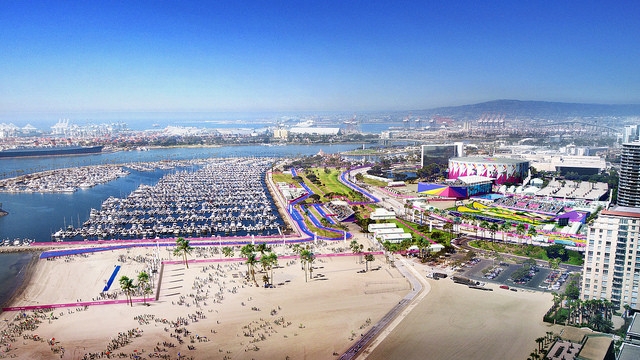 The cluster of venues would stage handball, water polo, sailing, triathlon, Para-triathlon, marathon swimming and BMX events should the American city be chosen to host the 2024 Olympic and Paralympic Games over sole challenger Paris.

The Downtown Sports Park, the Valley and South Beach are due to house the other three Sports Parks which make up Los Angeles 2024's concept.

Each of the Sports Parks would include dining, music, sponsor activations, sports showcases and celebration "Live Sites" for event and non-event ticket holders.

Los Angeles 2024 claim the concept "ensures athletes, officials and fans from around the world will be able to enjoy Los Angeles' diverse geographies and cultures, and allow as many Angelenos as possible to experience the Games on their doorstep".

The Long Beach Sports Park would be "connected to LA’s growing public transit system and lies within a single, integrated secure perimeter where all attendees will be able to walk easily from one venue to another in a safe, festival atmosphere", according to Los Angeles 2024.

"By using Southern California's wealth of top sports, housing and transportation infrastructure, Los Angeles 2024 will minimise construction risk and costs, and can spend the seven years leading up to the Games focused on providing all attendees with an unforgettable Olympic and Paralympic experience."

The International Olympic Committee (IOC) will choose between Los Angeles and Paris at its Session in Peru's capital Lima on September 13.

There is increasing speculation, however, that the IOC may award the 2024 and 2028 Games at the same time, with a working group comprised of their four vice-presidents currently assessing the possibility.

However, both Los Angeles and Paris have stressed that they are only interested in the earlier edition.