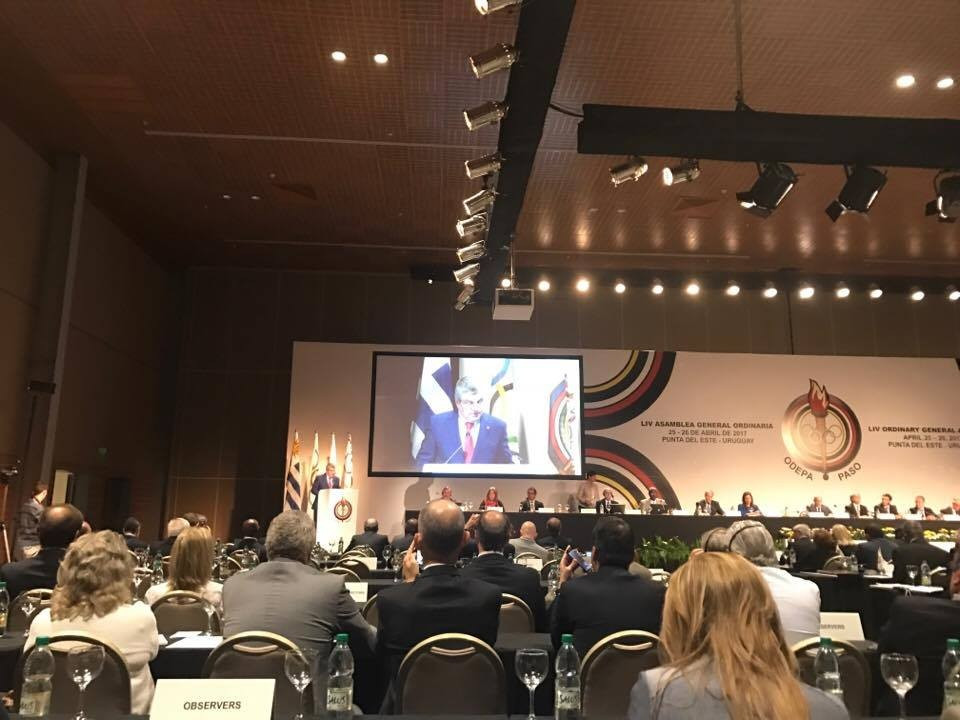 International Olympic Committee (IOC) President Thomas Bach has delivered a robust defence of the appeal of the Olympic Games here today but at the same time tried to justify the proposed reforms to the bidding process.

Speaking at the General Assembly of the Pan American Sports Organization (PASO), Bach claimed the IOC has "never been as successful as they are now" in negotiating with sponsors and broadcasters.

It could be seen as an attempt to rebut critics who point to the decline in bidding cities and conclude that the Olympics are struggling to sustain their appeal.

Bach, however, added that the secret of the IOC's success is continually being open to the idea of change.

He used this as a means to justify bidding reforms in a new era in which "the good times are over".

This includes the possible joint awarding of the 2024 and 2028 Summer Olympic and Paralympic Games this year.

"Our TOP programme [sponsorship scheme] has never been as successful as it is now," the German told delegates from 41 Pan American National Olympic Committees.

"Contracts with rightsholding partners have never been as successful as they are now.

"But what is more important, is not the absolute figures and growth but the confidence expressed in the Olympic Movement and the Olympic Games by the long term contracts that these sponsors and rights-holders are interested to sign.

"We have contracts on the TV side until 2032 and we have TOP sponsors on board until 2028 and there are more in the pipeline."

Bach claimed that sponsors are "not just interested in the next edition of the Games" but appreciate how the "Olympic Games are an anchor of stability when other aspects of business and politics are in turmoil".

"They all see that the world is more fragile and volatile than ever as the risks on every continent get bigger and bigger," he added.

"Then they see the Olympic Movement and the Olympic Games which, at this moment, are the only event in the world still managing to get all the world together under one roof.

"We managed this in Rio despite difficult circumstances and this is what they appreciate and value.

"They are counting on us to deliver this stability and this message of the Olympic Games, and of peace, in the future.

"They also have confidence in our ability to change because, if you do not change, you are getting lost.

Bach, speaking in a lengthy update on key issues facing the Olympic Movement, then declared how we "cannot ignore that we have an issue with the candidature process".

This follows the withdrawal of Budapest, Hamburg and Rome from the 2024 race to leave Los Angeles and Paris as the only surviving candidates.

He once again hinted that the Olympics is used as a political tactic against ruling Governments in particular countries but admitted the current system leaves them open for criticism.

"What we have seen is a change in the decision making procedures in different countries: particularly in Europe but also elsewhere," Bach said.

"I do not need to go into detail about how the Olympic Games is used for political purposes by groups in some countries.

"We have to understand that our candidature procedure is giving arguments for this as it is too expensive and too complicated.

"The good old times are over with regard to candidature procedure.

"Today hardly any Mayor or political authority can go to their population and say, 'Let's try again, and maybe we will win' after spending millions on an unsuccessful bid.

"Maybe it will change back in five or 10 years, but it is not possible today."

Bach claimed that it is crucial to make the process "less expensive, more efficient, more streamlined and more accessible in time for the 2026 Winter Olympic race".

"On the other hand, we have the fascinating race for 2024 between two great countries and great projects," he said.

"We could sit back and say, 'What better can happen than having these two candidates for 2024 and we can be confident today that whoever is elected we will have a great Games'

"But if we were this complacent we would not be in sport.

"We have to work out how we can best explore this great opportunity and to see what can be done in this respect."

A Working Group chaired by the four IOC vice-presidents has been begun to explore potential changes.

Bach hopes they will complete their work "hopefully in the next month" in time for discussion at the IOC Candidate City Briefing in Lausanne on July 11 and 12.