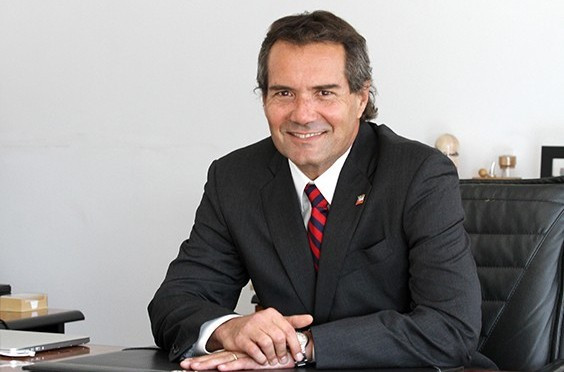 Chile's Neven Ilic has insisted his campaign for the Pan American Sports Organization (PASO) Presidency is "stronger than ever" despite Santiago becoming the only candidate in the race for the 2023 Pan American Games.

The capital city now appears poised to be officially confirmed as host after the postponement of the only rival bid from Argentinian capital Buenos Aires until 2027.

This decision, announced yesterday by Argentine Olympic Committee President Gerardo Werthein, had prompted speculation that Ilic would be forced to withdraw from the Presidential race to avoid having two conflicted priorities.

Ilic is one of three challenges left alongside Brazil's Carlos Nuzman and Dominican Republic's José Joaquín Puello with four days to go until an election is held during the PASO General Assembly in Punta del Este in Uruguay.

Some had even mooted that he may have agreed a deal with Nuzman and Werthein involving his withdrawal in return for Santiago being unopposed for the Pan American Games.

But this has been strongly rejected by the Chilean Olympic Committee President.

"I haven't listened to that theory," Ilic told insidethegames today.

"I am every day stronger in my candidacy to be PASO President.

Werthein claimed that Buenos Aires did not have the necessary finances nor logistical capability to host next year's Summer Youth Olympics as well as the Pan American Games in 2023.

But the announcement has certainly added an intriguing twist to the PASO contest as delegates prepare to travel to Uruguay, the home nation of current PASO President Julio Maglione.

All 41 PASO members have one vote, while the 10 to have hosted previous editions of the Pan American Games will each receive an additional one.

St Lucia's Richard Peterkin and St Vincent and the Grenadines' Keith Joseph have already withdrawn from the process to replace Maglione after initially standing.

Ilic, who turned 55 this month, is the only one of the remaining trio young enough to be made a member of the IOC should he be successful.

Nuzman, the President of the Organising Committee for the Rio 2016 Olympic and Paralympic Games, is 75 and already an IOC honorary member.

Puello, the sole remaining Caribbean candidate after the two withdrawals, is 76.

But Ilic is thought to be relying on a late surge after initially struggling to receive wide support.

One other potential challenge to have emerged this week concerns a letter supposedly distributed among PASO members by former Chilean Gymnastics Federation President Eduardo Bahamonde.

He reportedly accuses Ilic of wrongdoing in the electoral process to select his successor.

However, Maglione has already told Chilean newspaper La Tarcera that this incident is nothing to do with PASO and that concerns should be directed towards the International Gymnastics Federation (FIG), who have not yet commented.

"PASO does not get into these kinds of problems," he said.

"If they have to make a claim, they should do it to the FIG and not to us."

Ilic has denied wrongdoing and claimed this will not affect his bid.

He also expressed joy at the likely prospect of Chile being awarded a Pan American Games.

The country has never hosted the bloc's showpiece event before, although Santiago did finish joint second behind Lima in the race for the 2019 edition.

"A world of opportunities are opening up for Chilean sport," Ilic told Cooperativa.

Chilean Sports Minister Pablo Squella and Mayor of the Santiago Metropolitan Region Claudio Orrego are now expected to accompany him to Uruguay in order to formally present the bid.

It had initially been proposed that an election would take place in a yet-to-be-determined meeting later this year. but now seems likely Santiago could be rubber stamped as host this week.