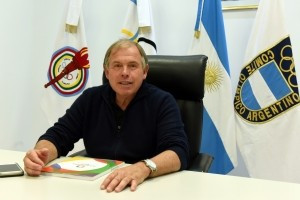 Buenos Aires has withdrawn from the race to host the 2023 Pan American Games, leaving Chile’s capital Santiago as the only bidding city.

Werthein claimed the Argentine capital did not have the necessary finances nor logistical capability to host next year's Summer Youth Olympics as well as the Pan American Games in 2023.

Werthein vowed the city, which staged the inaugural Pan American Games in 1951, would return to the running for the 2027 edition of the quadrennial event.

He described the call to pull out of the race for the Games in six years' time as a "conservative, prudent and careful decision".

"We found that in this instance, the budgetary impact of the Games and viability was too strong a subject, bearing in mind that we have the Youth Olympic Games next year," Werthein said in a statement.

"The issue was agreed between the National Government, the City Government and the COA, and we think it is best to take four more years.

"The enthusiasm is intact, but we must add realism.

"By taking four more years, we give ourselves a little more time and prioritise other issues that have to do with the social and things that are pending."

The decision from Argentina means Santiago, which unsuccessfully bid for the 2019 Pan American Games, given to Lima, is set to be awarded the event for the first time.

Santiago is likely to be officially announced as the host city at the Pan American Sports Organization (PASO) Ordinary General Assembly set for Lima at a yet-to-be-determined point later this year.

Buenos Aires and Santiago had both declared their candidacies by sending a letter of intent to the PASO in February.

The two cities had until April 30 to provide PASO with a deposit and other required information.

In promoting the credentials of Buenos Aires, which hosted the 2013 IOC Session where Tokyo was chosen to host the 2020 Olympic and Paralympic Games, in February, Werthein said the bid had strong Government support.

He insisted "it will have no negative impact on the country, citizens or budget" and stressed they would have all the facilities needed as a result of staging the Youth Olympics.

"We made the complete dossier with the analysis of all the sites and the budget," added Werthein.

"It was a very hard job to understand how much it cost us and what we could use.

"When we saw the synergies within the priorities that existed in the city, was that the Olympic Village of 2018 was delivered immediately after the Games to social housing as a priority to re-urbanise the southern part of the city.

"Clearly, we would have to make a much larger Pan American Village.

"The second point is that this was a project exclusively from the city of Buenos Aires, where we were going to carry out the Pan American Games without sub-headquarters.

"In addition to a new Village and upgrading the sports facilities there are certain requirements that are within the Pan American world that are different from the Youth Olympic Games."

Werthein claimed that, despite the withdrawal, the COA remained committed to Buenos Aires becoming the "sport capital" of the region.

Argentina are bidding for the 2027 Rugby World Cup, while they are favourites to land the rights for the 2030 FIFA World Cup in a joint effort with Uruguay to celebrate the centenary of the 1930 tournament.

The announcement comes with less than a week until the PASO Presidential Election at the organisation's General Assembly in Punta del Este in Uruguay on Wednesday (April 26).

Chile's Neven Ilic is one of the three candidates vying to replace Julio Maglione, the President of PASO since the death of Mexico's Mario Vázquez Raña in February 2015.

Ilic would have to preside over preparations for a Pan American Games in his own country should he secure the top job at the organisaton.

"We are going to have to align ourselves with a new modality of how to carry out the Games, how to make them more accessible and to find a way to alleviate the cost so that they can continue to rotate through the different cities of the Pan American region," Werthein said.

"We believe that Buenos Aires is a winning city and has a lot of consensus in Pan America."