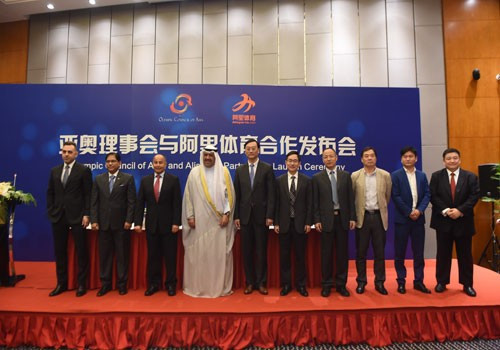 E-sports is set to become an official medal sport at the 2022 Asian Games in Chinese city Hangzhou following the announcement of a strategic partnership between the Olympic Council of Asia (OCA) and Alisports.

The OCA says this is a reflection of the "rapid development and popularity of this new form of sports participation among the youth".

As part of the partnership, e-sports is also due to feature as a demonstration sport at next year's Asian Games in Indonesian cities Jakarta and Palembang.

Alisports, which was established in 2015 as the Alibaba Sports Group by the Chinese e-commerce giant Alibaba Group, intends to work closely with the OCA to develop the marketing of e-sports.

"The Olympic Council of Asia has constantly been committed to the heritage, development and improvement of Asian sports, and we are extremely pleased about the strategic partnership with Alisports," OCA President Sheikh Ahmad Al-Fahad Al-Sabah said.

"We look forward to further collaboration with Alisports in regards to digital sports concepts along with sporting events.

"We are sure that the extensive organising capabilities of Alisports, and their experience in e-sports, will assist the OCA in developing all sports."

Alisports founder and chief executive Zhang Dazhong added: "I would like to thank the Olympic Council of Asia for their faith in Alisports.

"Together we will work on providing the sponsors of the Asian Games with more opportunities and maximising the market value, so that the OCA enjoys optimum benefits and advantages."

E-sports has already been added to the programme of the 2017 Asian Indoor and Martial Arts Games (AIMAG) in Turkmenistan’s capital Ashgabat, where it will serve as a demonstration sport.

Sheikh Ahmad said there were more than 350 million people playing e-sports around Asia.

A series of online qualification rounds in four e-sports will be held at national and then regional level by the six regions: West Asia, Central Asia, South Asia, South East Asia, East Asia and Oceania.

The six regions will each provide eight qualifiers - two in each game - for the final tournament in Ashgabat, where they will be joined by four Turkmen players to take the field to 52 players.

E-sports to be contested at the fifth edition of the AIMAG, scheduled to take place from September 17 to 27, include FIFA 2017, Multiplayer Online Battle Arena and Real Time Attack.

In January, Alibaba signed a deal that committed itself to Chinese e-sports for a three-year period.

It means Changzhou will remain the home of the World Electronics Sports Games (WESG), which Alibaba launched last year, for the foreseeable future.

In July of last year, Alibaba announced a partnership with the International e-Sports Federation (IeSF).

According to The Esports Oberserver, the company has committed $150 million (£120 million/€141 million) to e-sports.