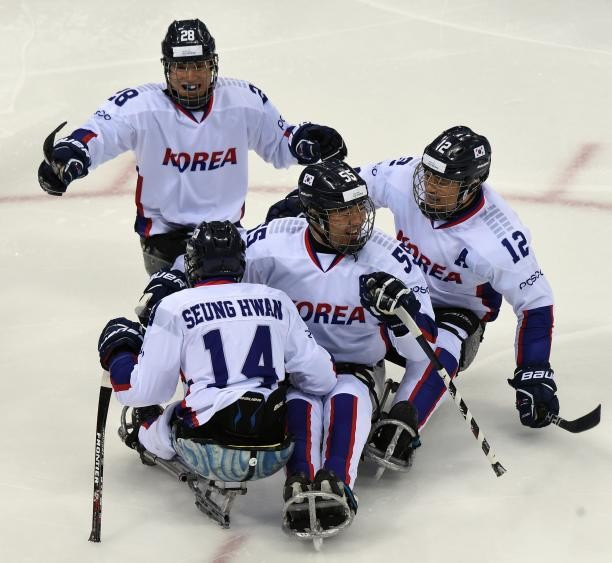 Hosts South Korea remain undefeated at the World Para Ice Hockey Championships after scoring early and late in their 2-1 victory over Norway in Gangneung.

Seung-Hwan Jung gave the Koreans the lead just 42 seconds into the contest before Rolf Pederson equalised for the Norwegians in the second period.

With a little under two minutes remaining, Dong-Shin Jang bagged the winning goal for the home side at the Gangneung Hockey Centre.

Jang is a three-time Paralympic medallist in wheelchair fencing but is just as adept on the ice.

"I'm so excited, I cannot even explain how I feel right now," he said.

"The head coach changed my position from defence to offense recently, so I knew all the staff believed in me to score.

"I had patience on the ice and waited for the right pass to shoot, and when I got it, I scored."

The World Championship A-Pool competition is serving as a test event for next year's Pyeongchang 2018 Winter Paralympics.

Eleven players got themselves on the scoresheet as the Canadians tied their own record for most goals by a single team in a World Championship game.

Nineteen-year-old forward Declan Farmer scored a hat-trick for the second day in a row to beat team-mate Adam Page's record for World Championship points by a US player, now boasting 24.

Sandro Kalegaris was on target for the Italian reply.

Canada currently top the round robin standings with three victories from three.

The US and South Korea are also undefeated but have only played twice each in the seven-team tournament.

Round-robin matches will continue tomorrow with Canada colliding with South Korea in the game of the day.

The Americans will meet Germany with Norway clashing with Sweden.