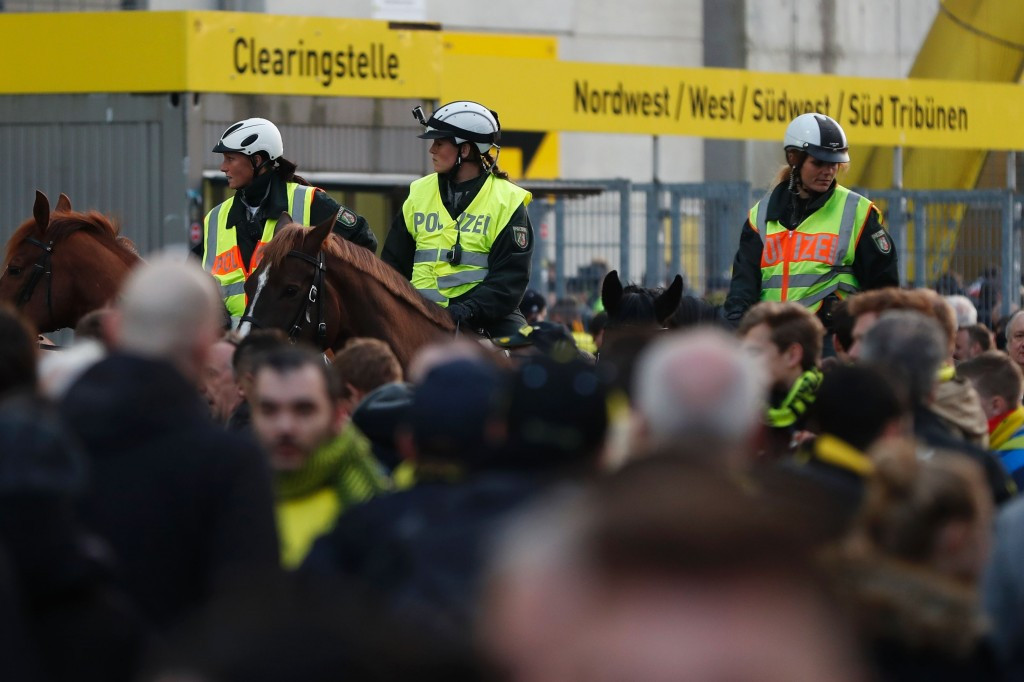 Borussia Dortmund's home UEFA Champions League quarter-final tie with Monaco has been postponed after defender Marc Bartra was injured in a series of three explosions near to the German club's team bus this evening, which police believe was a targeted attack.

The club said Spanish centre-back Bartra will undergo surgery on his injured arm to repair a fracture and remove shrapnel following the incident.

Dortmund police confirmed there had been "three explosions in the area of the Dortmund team bus" as it left the team hotel, the L'Arrivee Hotel and Spa, prior to the first-leg clash at Signal Iduna Park.

They said they were "working on the assumption" that the incident involved "an attack with serious explosives", although details concerning the exact nature of the blasts remain unclear.

In a later update, Dortmund police said they had found a letter at the crime scene but were still validating its authenticity.

It claimed responsibility for the attack, which saw the bus hit by three blasts from devices planted in bushes at the roadside close to the team's hotel.

"The bus turned into the main street, when there was a huge boom, a real explosion," Dortmund goalkeeper Roman Burki told Sky.

"I was sitting in the back row next to Marc Bartra, hit by fragments, after the bang, we all ducked."

The match between the two sides will now provisionally take place tomorrow evening, the Bundesliga club said in a statement posted on their official Twitter account.

Borussia Dortmund added that there was "no danger" to anyone inside the stadium.

"A bomb exploded at the team bus next to the hotel," the club said in a statement.

"The players are safe.

"There is no danger at the stadium."

Monaco fans at the stadium chanted "Dortmund" in solidarity with the German team following the explosions, while Spanish club FC Barcelona tweeted their support for the player, the club and its fans.

German newspaper Bild quoted a police spokesperson as saying that explosive devices were placed in a bush by the road where the bus was travelling.

The 80,000-capacity stadium was evacuated after the game was postponed.

The incident occurred in the Höchstem district, around 10 kilometres from the venue at 19.15 CET.

Borussia Dortmund chief executive Hans-Joachim Watze admitted the team were "in shock" and revealed police had told him the explosives were hidden and detonated as the bus went past.

"We must get through this but it will not be easy for the players," he said.

"Everyone will come even closer together and I’m sure the team will feel this."

👍 Thank you for your support in and outside the stadium and your kind messages throughout the whole world. #bvbasm

Back in November 2015, a friendly match between Germany and The Netherlands in Hannover was cancelled due to a "concrete security threat".

Germany, the current world champions, had been against the idea of the friendly going ahead after the Stade de France was targeted in the Paris terror attacks when they were in action against the hosts.

Around 80 players, officials and other staff members from Germany spent the night in the dressing room as the chaos ensued around the French capital, with 129 people killed following a series of co-ordinated attacks in various regions of the city.

"The thoughts of every one of us at FIFA are with the people of Dortmund, and the fans of both Borussia Dortmund and Monaco following today’s troubling events," said FIFA President Gianni Infantino.

"We are closely monitoring the condition of BVB's Marc Bartra, and wish him a speedy recovery from his injuries.

"FIFA condemn the incidents in Dortmund.

"We are all awaiting further details of the incident."