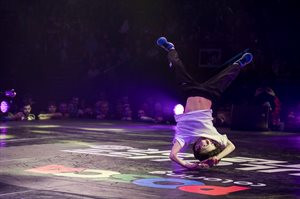 The World DanceSport Federation (WDSF) has unveiled what it describes as an "innovative" qualification process as it continues preparations for break dancing's debut appearance on the sports programme of the Summer Youth Olympic Games in Buenos Aires next year.

In December of last year, the International Olympic Committee (IOC) enlisted WDSF with the task of organising three breaking events at Buenos Aires 2018.

The WDSF says the qualification system, which will aim to identify the world's best male and female breakers born in 2000, 2001 and 2002 - 12 of each gender - is "without precedent" in Olympic sports.

It is described as "combining a global talent identification process on the digital field of play with the rigours of head-to-head qualifying battles at major breaking events held throughout the world".

In the first stage of qualifying for one of the 24 quota places the IOC has allocated to breaking, each "b-boy" or "b-girl" will upload a one-minute, unedited breaking video of himself or herself to a dedicated online platform.

The b-boys and b-girls will take part in a digital evaluation process, which will ensure they comply with basic rules that govern the format of the recording and also involves registering themselves online.

Parental consent will be required in countries where it is needed as well as documented proof that they were born between January 1, 2000 and December 31, 2002.

Spread over three months, the first stage of qualifying is open to all breakers with no restrictions other than age.

"In the true spirit of 'show and prove', participation does not require any licence, affiliation to an organisation, or the sanctioning by a National Olympic Committee," a WDSF statement reads.

"The confidence in one's abilities as a breaker, a video camera or a smartphone, plus access to the internet, are all that is needed to take this first step towards Buenos Aires 2018."

All videos uploaded to the platform between May 1 and July 31 will be screened by moderators before being made available for public viewing.

Another so-called innovative element of the process is that members of the public are invited to express their opinions on their preferences.

A temporary standing per country and per gender will be established based on the views expressed by the public.

To conclude the process, beginning on August 1, a panel of professional judges from the international breaking scene will step in and assess all submissions, identifying the top five b-boys and top five b-girls per country.

The breakers selected by the judges will then be able to enter stage two of qualification.

The WDSF claims the qualification system has been put in place in a collaborative effort between itself and the members of the professional breaking community worldwide.

There has been opposition to the WDSF in recent times, however, with the governing body accused of exploiting break dancing as a "Trojan horse" to "get its foot in the door of the Olympics".

The accusation was made in a petition entitled "Get the WDSF's Hands Off Hip-Hop", which has been sent to the IOC, and calls for the WDSF to be expelled from the Association of IOC Recognised International Sports Federations (ARISF).

The petition has been set up by Serouj Aprahamian - a Lebanese-Armenian breakdancer and political activist who grew up in Los Angeles in the 1990s - through change.org.

It claims the WDSF has "absolutely no connection or credibility with any legitimate entity in the worldwide breaking community" and states it is a "travesty and a scandal" that the Buenos Aires 2018 Organising Committee and the IOC "have allowed these impostors to oversee breaking at the Youth Olympics".

The WDSF responded by encouraging those people who often cast the body as a "ballroom" organisation to look back at the 2013 World DanceSport Games in Taiwanese city Kaohsiung, where more than 20 different events in 14 disciplines were contested under the unified brand "DanceSport".

The inaugural edition of the Games "visualised best what the 'DS' in our acronym stands for", according to WDSF, which followed up the event by beginning work on its 2020 VISION - a plan that defines the future strategies for DanceSport's continued development and growth in popularity.

The "Get the WDSF's Hands Off Hip-Hop" petition, which can be accessed by clicking here, currently has 2,152 supporters and is targeting 2,500.