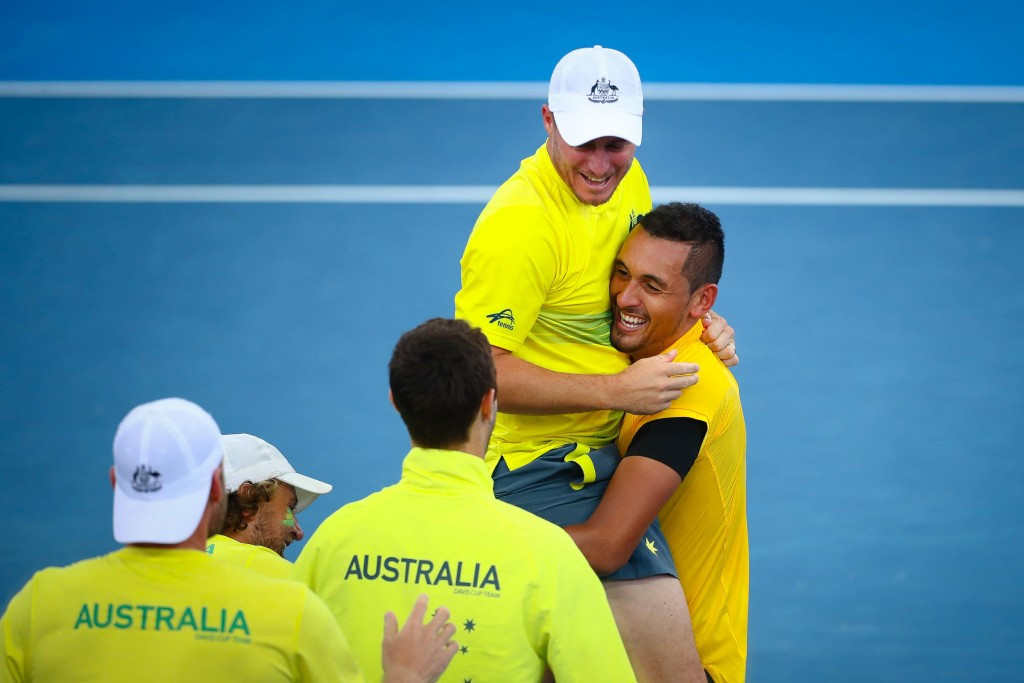 Australia progressed to the semi-finals of the Davis Cup after Nick Kyrgios won his singles match against Sam Querrey of the United States to secure a 3-1 victory today.

The US kept their hopes of turning the contest around yesterday as they emerged victorious in the doubles rubber to cut the deficit to 2-1 at the Pat Rafter Arena in Brisbane.

Kyrgios and Jordan Thompson had put Australia 2-0 up with respective singles wins over John Isner and Jack Sock.

With Australia 2-1 up going into the final day, Kyrgios clinched the victory with a 7-6, 6-3, 6-4 straight sets win over Querrey to give the hosts an unassailable lead.

"There is no greater honour than wearing the green and gold and coming out here and representing your country," said Australian captain Lleyton Hewitt.

"I couldn't be prouder of my boys.

"They've put so much hard work and effort into this whole year and this campaign and they deserve this.

"They come straight back from the tournaments and do absolutely everything we ask of them as the coaching staff."

Australia will now face Belgium for a place in the final after they secured a 3-1 win over Italy today at Charleroi's Spiroudome.

The Italians trailed 2-0 but won the doubles rubber yesterday as Andreas Seppi and Simone Bolelli prevailed in a five-set epic to beat Ruben Bemelmans and Joris De Loore 4-6, 6-3, 6-4, 3-6, 7-6.

However Belgium's David Goffin, a convincing winner in his match with Andreas Seppi on Friday, produced a sublime display in today's singles to defeat Italy's Paolo Lorenzi 6-3, 6-3, 6-2 to give his country a 3-1 lead.

France and Serbia booked their places in the last four of the competition yesterday by taking unassailable leads.

The French team defeated Great Britain 3-0 while Serbia also claimed the same advantage over Spain in their best-of-five contest.