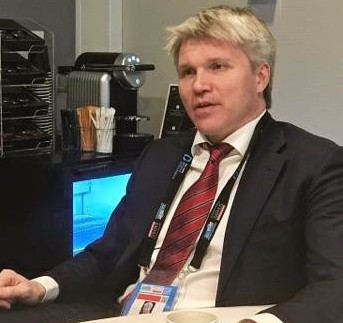 Russian Sports Minister Pavel Kolobkov is adamant that his country is resolving its doping problems and deserves to be fully reintegrated into the international sporting fold as soon as possible.

The former Olympic fencing champion admitted his disappointment with the number of doping cases still emerging from retests of Beijing 2008 and London 2012 samples.

But he insisted they are now doing everything possible to reform the system.

Any suspension or restriction of their participation at next year's Winter Olympic Games in Pyeongchang would therefore be unfair, he claimed.

"Russia is a country with a national flag, a national hymn," Kolobkov told insidethegames here during the SportAccord Convention.

"There should be no discussions that we should not take part under the flag of this great sports country.

"If I don’t believe that Russian sportsmen will take part in the Olympic Games, there is no point me working.

"I believe many important people believe this too."

Kolobkov, appointed Sports Minister in October when Vitaly Mutko was promoted to Deputy Prime Minister, has held a series of meetings here with leading officials here.

"It was very important to speak with them about the Russia position and show how we are eager to get rid of such problems," he said.

Kolobkov is confident the Russian Anti-Doping Agency (RUSADA) will be declared provisionally compliant with the World Anti-Doping Code next month before a full decision is in November.

This will enable Russia to recommence their own testing programme, rather than rely on recruiting foreign companies, he hopes, although they will still have support from UK Anti-Doping.

The WADA-commissioned McLaren Report published last July produced evidence that more than 1,000 Russian athletes were implicated in a scheme where samples were tampered with and manipulated at events including the 2014 Winter Olympic and Paralympic Games in Sochi.

The Pound Report, published in 2015, had documented a similarly state-sponsored scheme in athletics.

Two IOC investigations are currently probing this evidence to consider retrospective sanctions against against Russian performances at Sochi 2014, as well as possible limitations on their participation at Pyeongchang 2018.

Russian Para-athletes were banned at Rio 2016 or remain suspended from any event governed by the IPC.

Russia can currently only compete neutrally at athletics events if that can prove they have operated in an "effective testing system" outside the country.

Both governing bodies have indicated that it is unlikely any suspension will be lifted until RUSADA is compliant again.

"I think that the [IPC] President [Sir Philip Craven] of such a huge organisation shouldn’t do such a thing [as ban Russia] and should think about all the Paralympic sports, not just in France and Germany but in Russia too.

"I don’t understand how such a decision can be taken about their destiny.

"I am also sure that Russian track and field are clean and they deserve to compete under the Russian flag.

"They train for one-and-a-half years but can only participate in competitions in Russia.

"How can this be?

"We should quickly solve this problem as the life of the best sportsmen is very short.

"It is important not just for Russia but for their sport opponents - you cannot call yourself a champion unless all the best sportspeople are taking part."

One issue still hindering Russia's compliance involves the lingering prevalence of coaches linked to doping, as well as the recent appointment of two-time Olympic pole vault champion Yelena Isinbayeva as chair of the RUSADA Supervisory Board.

This appointment was opposed by WADA as they do not believe she was the appropriate person to lead the organisation.

Isinbayeva, last year elected a member of the IOC Athletes' Commission, has been a vocal critic of all Russian doping problems and has repeatedly criticised the IAAF suspension.

"I think she was a very good choice and I truly believe it," Kolobkov said.

"Everyone in Russia knows who she is."