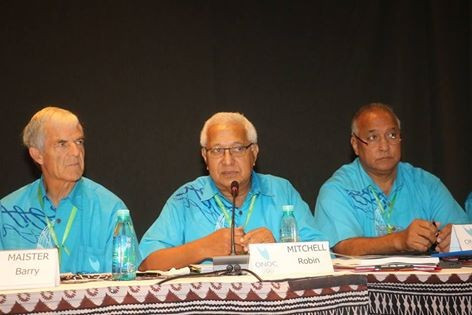 Robin Mitchell was confirmed for a third term as President of the Oceania National Olympic Committees (ONOC) as the organisation’s membership voted for their first female vice-president here today.

Mitchell’s position was virtually assured heading into today’s ONOC General Assembly as the sole candidate for a post he has held since 2009.

His four-year term was confirmed by acclamation but there was a three-way contest for the vice-president.

Boudier was eliminated after the first round of voting after candidate achieved over 50 per cent of the vote, leaving Stanley and Temengil in contention.

The latter prevailed in the second round of the contest, confirming her as ONOC’s first female vice-president.

Temengil is also believed to be the first woman to hold the post at any Continental Association, the Palau official replacing New Zealand’s Barry Maister.

Maister will remain on the ONOC Board as he is an International Olympic Committee (IOC) member, along with Papua New Guinea's Auvita Rapilla and Australia's John Coates and James Tomkins.

A breakdown of the votes for each candidate was not released.

Tributes were paid to outgoing board members Craig Phillips of Australia and New Zealand’s Barbara Kendall, the latter’s term as ONOC Athletes’ Commission chair having drawn to a close.

Her replacement will be decided in the coming months, with one of the newly formed Executive Board’s tasks being to ratify the nominees for ONOC’s Athletes, Women in Sport, and Medical Commissions.

The General Assembly began in emotional fashion as tributes and a minute's silence were held for VASANOC official Joe Carlo and ONOC administrator Hanisi Visanti.

Coates, an IOC vice-president, also announced that Mitchell would be granted the AOC Olympic Order of Merit in recognition of his service to ONOC.

The move was reciprocated later in the Assembly, with a motion was moved for ONOC to recognise the contribution made by the AOC President to the region.

Reports were  delivered by each of ONOC's Commissions, as well as an NOC relations representation by the IOC's Pere Miro.

The Oceania Australia Foundation and Oceania Sport Education Programme also provided updates, while preparations for the 2020 Olympics in Tokyo and the Asian Indoor and Martial Arts Games in Ashgabat in September were discussed.

The latter saw the Turkmenistan organisers offered to cover ONOC members accommodation and travel to the Games.

Tonga will selected to stage the next ONOC General Assembly in Nuku’alofa next year.