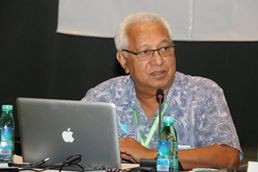 Oceania National Olympic Committees (ONOC) President Robin Mitchell has expressed his hope sporting standards will increase across the region over the next four-year cycle leading up to Tokyo 2020.

Mitchell, due to be re-elected unopposed for a third term on Saturday (April 1), said the Continental Association were looking at changing their approach in an bid to aid athletes.

The International Olympic Committee (IOC) member believes that by working more closely with Federations, Pacific nations could make an impact at the next Summer Games in the Japanese capital.

"We have got to improve the standards," he told insidethegames here today.

"Particularly in track and field, as there are invitational places.

"Some of them have said 'unless you qualify, you do not get in', to help raise standards.

"We are looking at working more closely with Federations and are hoping our National Olympic Committees (NOCs) can talk with them here and use the chance to get their planning together.

"We used to provide funding for it, but we are now looking at changing the process as some of the work we are doing is development work, which the International Federations should be doing.

"We are looking more at providing scholarships, so if your Federation identifies you as a great table tennis player, you have enough opportunities to qualify."

ONOC's largest NOCs Australia and New Zealand have strong Olympic pedigree, and Fiji made a major impact at Rio 2016.

Their men's rugby sevens team lived up to their favourites tag by storming to victory, giving the country their first Olympic gold medal as the sport debuted.

The medal is viewed as a united achievement by Oceania by the majority of the Pacific Island nations here.

Mitchell , a Fijian, believes the gold medal has also provided further inspiration among the NOCs as they build their teams towards Tokyo 2020.

"All of those boys are local and have trained locally," he said.

"They brought in a British coach who provided discipline and guidelines for what you have to do.

"These boys give their life for the game.

"There is a nice set-up and a lot of them come through to play national competitions."