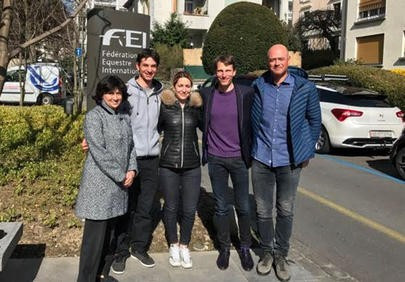 The discussions included the proposal from the Alliance of Jumping Organisers (AJO) about making entry fees more consistent globally, which will be further discussed at next month’s FEI Sports Forum.

De Vos, who has already publicly stated that he does not support the proposal, clarified that the FEI has not taken any position on this matter and welcomes an open discussion.

The Global Champions League, which is now an FEI approved series and fully aligned with the FEI Jumping rules, was also on the agenda for discussion.

Blood disqualifications, the risk of contamination during events and the resulting potential for adverse analytical findings were also highly debated.

Discussions also took place on the FEI World Equestrian Games, the athletes’ representative voting system, the criteria for National Federations to join the organisation and the FEI Nations Cup.

The future of the Nations Cup will be the focus of a session on the first day of the Sports Forum, which will be held at the International Management Development Institute (IMD) in Lausanne between April 10 and 11.

“This was a much-needed meeting with the IJRC as there was a lot that needed to be clarified," De Vos said after the meeting.

“Both parties had the opportunity to express their points of view and we had some very constructive dialogue.

“We are constantly striving to further improve our communications outreach and the consultation process with all our stakeholders and today’s meeting with the IJRC was really beneficial, as it gave everyone the opportunity to discuss current issues.

"The IJRC is an important stakeholder group and it was good to take on board their views."