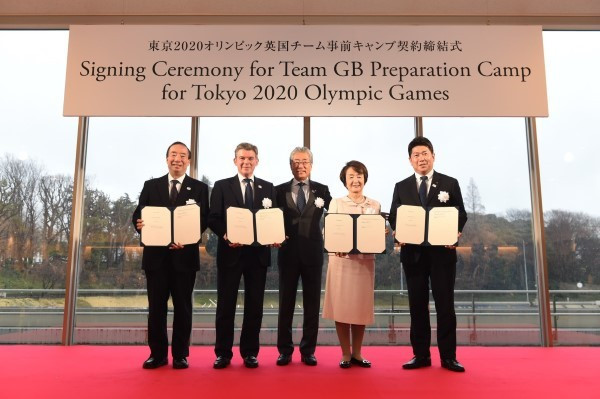 Providing Great Britain's athletes with pre-Games facilities prior to Tokyo 2020, due to take place from July 24 to August 9, will be Keio University in Minato, the Todoroki Athletics Stadium in Kawasaki and the Yokohama International Swimming Pool.

The three sites, all based in the Greater Tokyo area, will form the BOA's biggest-ever pre-Games preparation camp and will be able to accommodate up to 90 per cent of Britain’s selected athletes for the Games.

The camp will allow athletes the opportunity to acclimatise and complete their final preparations for Tokyo 2020 in dedicated International Federation-standard venues.

"With three-and-a-half years to go until the Tokyo 2020 Olympic Games, it’s fantastic to already have agreed our first preparation camp facilities and we thank Keio University, Kawasaki City and the City of Yokohama for their support of Team GB," BOA chief executive Bill Sweeney, who was joined by chairman Sir Hugh Robertson in Tokyo for the contract signing, said.

"Securing world-class training venues for our athletes plays a crucial role in gaining those final performance advantages in the run up to a Games and being so close to the Olympic Village and Tokyo itself is a great boost for the team who will fly out in 2020."

The BOA operated similar preparation camps before Beijing 2008 and Rio 2016, the latter hosting 380 athletes and officials from 14 sports in Belo Horizonte.

"From our experience in Brazil, we know the value in providing a world leading preparation camp with 21 medals yielded from athletes who travelled through Belo Horizonte last year as the camp played its part in Team GB’s history-making success," Sweeney said.

"Still a number of years out from the Games, it’s terrific to see Team GB leading the way once again in being the most prepared delegation at an Olympic Games.

"We could not have found a better group of partners to support Team GB, build lasting relationships, and develop exchange programmes to engage their local communities and promote Tokyo 2020."

Sir Hugh has described the signing of the training venue contracts as a vital step in ensuring Britain has the best possible chance to continue its Olympic success in 2020.

"Having these facilities as dedicated venues for Team GB ahead of the Games is great news for our athletes and further evidence that the British Olympic Association is a world leader in preparing a multi-sport team for an Olympic Games," he said.

"The support we’ve had so far from Keio University, and the cities of Yokohama and Kawasaki has been excellent and this will no doubt only grow as we get closer to the Games.

"The Team GB athletes selected for Tokyo in three years’ time will not only be able to expect the finest preparation camp available but also a warm welcome to Japan."

A Memorandum of Understanding was signed by the BOA and the Japanese Olympic Committee in February of last year, allowing the former to use sports facilities in the build-up to Tokyo 2020.

The agreement was also signed by the Yokahama and Kawasaki City Governments, as well as Keio University, and covered the provision of and access to facilities for the BOA.

"We at Keio University are truly honoured and delighted to sign this contract with the BOA regarding the lease of our facilities, which are located predominantly at Hiyoshi Campus, for Team GB’s preparation camp, and at the various opportunities for cooperation and exchange the contract affords," Keio University President Atsushi Seike said.

"Over the years, Keio University has actively promoted educational, research, and other forms of exchange with the UK.

"Through this collaboration with the BOA, we hope that Keio’s relationship with the UK will further deepen and continue to develop.

"Interacting with Team GB and support staff will be a great inspiration for Keio students and our athletes.

"I have no doubt this will also provide Team GB and support staff with the opportunity to deepen their friendship with and their understanding of Japanese society through our students, faculty, and staff, and the local community."

Fumiko Hayashi, Mayor of the City of Yokohama, added: "It is our great honour to conclude this agreement with the British Olympic Association.

"Football, baseball and softball games will be played in Yokohama during the Tokyo 2020 Olympic Games.

"The final of the Rugby World Cup 2019 is scheduled here in the preceding year.