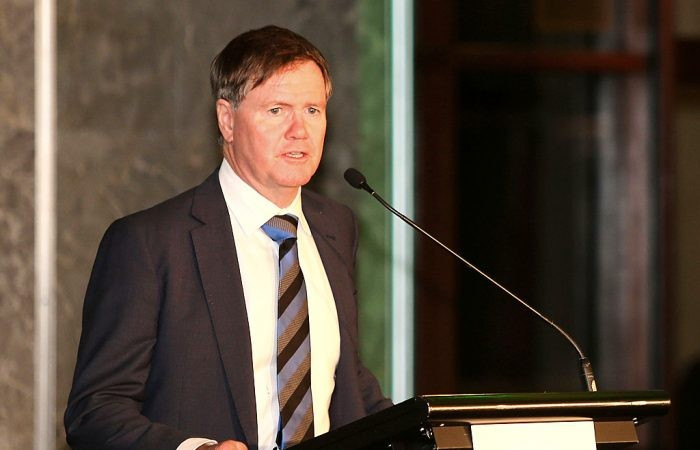 Tennis Australia President Steve Healy has announced his decision to step down from the role next month to pursue business interests.

Healy, who late last year was appointed chief executive of the Australia region and chairman of partners of global law firm Dentons, will vacate his position on April 10.

Vice-president Chris Freeman will take over until the Tennis Australia Annual General Meeting in October, when a new leader will be elected.

"Our business at Dentons is embarking on an exciting phase," Healy said.

"We are a firm with more than 8,000 lawyers spanning 57 countries and I am really looking forward to devoting the time necessary to ensure we are successful.

"I will of course miss Tennis Australia as it has been such a big part of my life.

"Tennis Australia has a talented Board and management team in place.

"We have just had an amazing summer of tennis and delivered the most successful Australian Open in history.

"We have achieved a lot during the last eight years and it is the perfect time for me to hand over the reins and pursue other challenges."

Freeman thanked Healy for his service to the Board and wished him well for the future.

"Steve has made an outstanding contribution to Tennis Australia and the sport of tennis," he said.

"He has represented the organisation on the Grand Slam Board, the International Tennis Federation, the Davis Cup Committee, as President of the Oceania region, and on the Melbourne and Olympic Park Trust.

"His passion for the sport is beyond question as is his commitment to its success."

Healy joined the Tennis Australia Board in 2008 and was first became President two years later before being re-elected in October last year.

"I am most proud of how we have united our member states and territories, worked with them to grow participation at all levels of the sport, doubled the revenue of Tennis Australia and distributions to members and improved player development results," Healy added.

"It gives me great pleasure to have been a part of the team that has engineered the biggest growth period in the history of the organisation, developed new tennis products and overseen many millions of dollars of dedicated investment in facilities across Australia.

"The growth of the Australian Open and in particular the fantastic tournament this year have been major highlights and they showcase our sport and our country.

"But the most important benefit of the Australian Open’s success is that it enables us all to grow participation and keep tennis the most popular sport in Australia.

"It has been an absolute privilege to be involved in this extraordinary sport."

The Australian reports that Healy is currently being sued for defamation by former Tennis Australia Board member Janet Young in the Supreme Court.

It relates to a legal challenge over a Board upheaval on the eve of last year’s Australian Open and ongoing questions surrounding a broadcast deal negotiated during his time as President.

Healy has said he will vigorously contest the action.

Tennis Australia stepped up its anti-corruption measures before the 2017 Australian Open after explosive allegations were made during the 2016 tournament of widespread match-fixing in the sport.

It was on the first day of last year's event that integrity issues in tennis came to light following the release of secret files by the BBC and BuzzFeed.