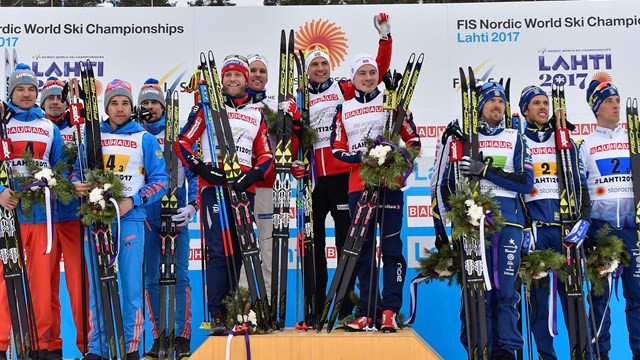 It came after a thrilling final leg in which Russia's Sergey Ustiugov gradually cut the lead held by Finn Haagan Krogh.

The Norwegian skier eventually crossed the line in 1 hour 37min 20.10sec to triumph over the Russian team by 4.6sec.

"Ustiugov is the worst you can have behind, Martin gave me just enough of a gap," admitted Krogh, who had begun his leg 18sec behind.

"I had to fight all the way.

"I really had to push myself."

However, there was no Norwegian double today in the Finnish resort as Eric Frenzel and Johannes Rydzek of Germany won the men's large hill/2x7.5km team sprint event.

It marked Rydzek's fourth gold medal of the Championships as Germany continued their clean sweep of the Nordic combined competitions.

The duo won in 28:45.80 to win by 24sec over Norwegian duo Magnus Hovdal Moan and Magnus Krog.

Yoshito and Akito Watabe of Japan took bronze in 28:54.0.