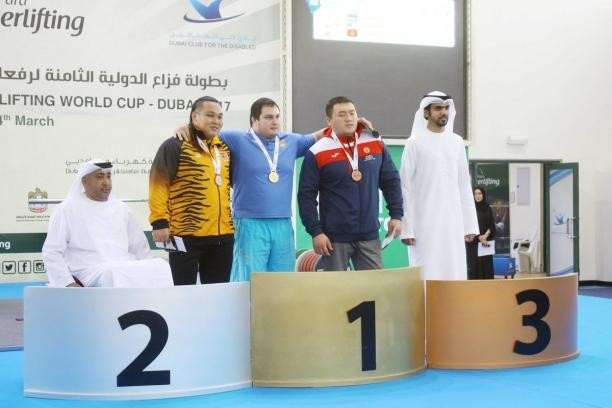 Ukraine and Jordan both secured two gold medals on the final day of the Powerlifting World Cup in Dubai.

European Open silver medallist Anton Kriukov produced a superb display in the men's up to 107 kilograms competition, with the Ukrainian lifting a personal best of 230kg.

Kriukov, the current European record holder in the up to 97kg weight class, recorded good lifts in all three attempts to comfortably top the podium.

Orosbaev fell two kilograms short of the Malaysian's total with a best attempt of 205kg.

Ukraine's other success came in the women's up to 79kg weight class as Liyubov Semenyuk clinched the gold thanks to her lift of 100kg, although she was the only entrant in the category.

Alhajaj, who was second in Dubai in 2015 and 2016, was streets ahead of the rest of the field as she finished in front of Australian debutant Christine Ashcroft by a convincing 45kg margin.

The multi-talented Jordanian secured the win with his opening lift of 225kg.

Iraq’s Hazar Ahmed saved the best until last to claim silver on 207kg, with Mykhailo Melynkov adding to the Ukrainian haul by taking bronze.

Dutchwoman Melaica Tuinfort, also a Paralympic bronze medallist, also demonstrated impressive form as she won the women's over 86kg competition with a best lift of 127kg.

She was unable to surpass her personal best of 130kg, however, as she failed with an attempt at 131kg.

Malaysia’s Norfariza Mortadza did enough for silver on 80kg, with no bronze medal awarded as Huda Ali of Iraq failed with all three lifts.

The next World Para Powerlifting World Cup takes place in Eger in Hungary from May 4 to 7.