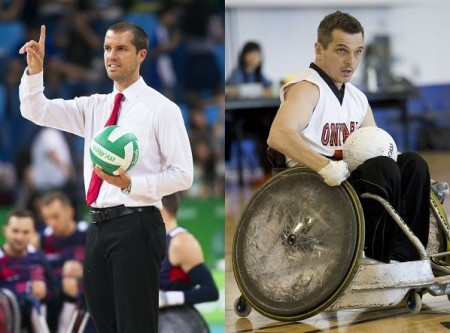 Patrick Côté has been appointed as the new head coach of the men's Canadian wheelchair rugby team as preparations begin for the 2020 Paralympic Games in Tokyo.

Prior to taking over the head coaching role, Côté amassed over 10 years of experience in various roles within wheelchair rugby.

He held the role of sport cocoordinator for the Québec Wheelchair Sport Association, helping to promote and develop a number of wheelchair sports throughout the province.

He also worked as the manager of technical programmes for the CWSA at London 2012 and Rio 2016, a position he held for six years before being appointed as interim head coach of the wheelchair rugby national team last November.

Côté is held in high regard throughout the wheelchair rugby community and has received wide acclaim for his technical understanding of wheelchair rugby, in addition to his development and use of data analysis.

"I am very excited and thankful that CWSA put their trust in me to be part of the programme and lead the Canadian wheelchair rugby national team into the new quadrennial," Côté said.

"I really look forward to the opportunity to work with such a great group of athletes, and to help them reach their full potential as individuals and collectively as a team."

Willsie has had a long distinguished career in the sport, one that has spanned over 19 years and has seen him earn numerous medals on the international stage.

He joins the national coaching team, while continuing to hold the role of player-coach for the Ontario Thunder, winners of the last five Canadian Championships.

"The combination of technical expertise and experience that Patrick and David bring to their coaching responsibilities will enable them to lead our team back onto the podium in 2020," said CWSA chief executive, Catherine Cadieux.

Canada finished fourth at Rio 2016, losing 52-50 to Japan in the bronze medal match.