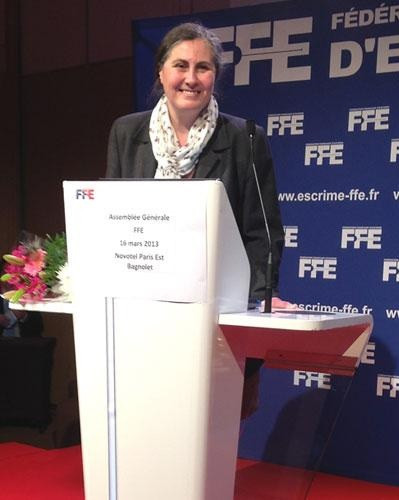 She will go up against current CNOSF President Denis Masseglia and David Douillet, who officially announced he would stand for election last week.

“This decision translates the desire to pursue my constant commitment to the service of the sports movement and to give it a breath of fresh air,” she said, underlining that she had the support of her own federation.

Lamour was in the French fencing team for a decade, taking part in the Seoul 1988 and Barcelona 1992 Olympics.

She is married to Jean-François Lamour, a double Olympic fencing champion and, like Douillet, a former French Sports Minister.

Since 2013, she has been President of the FFE after she won the election, gaining 79.84 per cent of the vote.

The May 11 vote will come at a critical juncture for the Paris 2024 Olympic and Paralympic bid.

It will be within days of the scheduled run-off for the French Presidential elections, pitting the two best-supported candidates from the first round against one another, on May 7.

Then on May 14, the International Olympic Committee (IOC)'s Evaluation Commission will arrive in Paris.

Following the recent withdrawal of Budapest, the French capital faces only one rival - Los Angeles - in a race scheduled to culminate on September 13 at the IOC Session in Lima.

Douillet, 48, who is probably the best-known of the three candidates in international circles, is a double Olympic judo champion, winning gold at Atlanta 1996 and Sydney 2000 in the men's +95 kilogram and +100kg weight divisions respectively.

He also won a bronze in the +95kg category at Barcelona 1992 and has four world championship titles to his name.

Masseglia, 69, has held the CNOSF Presidency since 2009 when he replaced Henri Sérandour.