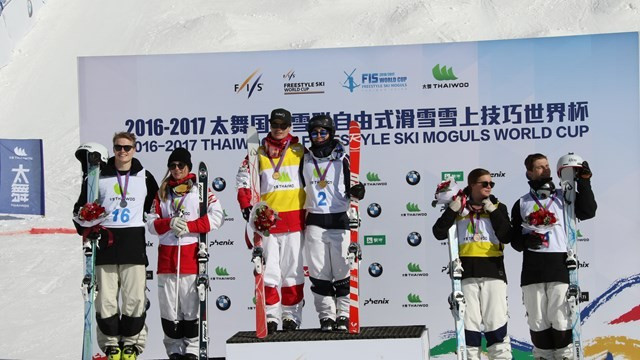 The 24-year-old registered a total of 86.00 points to overcome nearest challenger Brodie Summers of Australia by 4.25.

Kingsbury’s latest win leaves him one short of the record seven-consecutive victories he himself set back in 2014-15.

"I’m so happy to be on the podium today, especially to take first place," Laffont said.

"It wasn’t an easy course this morning with the ice, but this afternoon it was much better with the slushy snow.

"I just tried to enjoy my journey, and the win happened."

Cox leads the way in the women’s World Cup moguls standings with 794, followed by Laffont with 575 and then Dufour-Lapointe with 536.

Competition in Thaiwoo is due to continue tomorrow with the men’s and women’s dual moguls, the final events of the World Cup season.

Wang triumphed with 118.14 points, but compatriot Qi Guangpu was the biggest winner of the day after sealing the World Cup title with a runners-up finish on 117.19.

Qi now has a 132-point advantage over Belarus' Anton Kushnir with just one event remaining and a maximum of 100 points on offer.

In the women’s event, former Olympic champion Lassila took the win after scoring 97.64.

Fellow countrywoman Danielle Scott made it an Australian one-two with a score of 94.47, while China's Xu Mengtao rounded out the top three with 91.29.

Scott has a two-point lead over second-placed Xu in the World Cup standings going into the final event of the season in Moscow next Saturday (March 4).

Lassila’s second win of the season sees her sitting in third place, 148 points short of Scott’s total of 402.