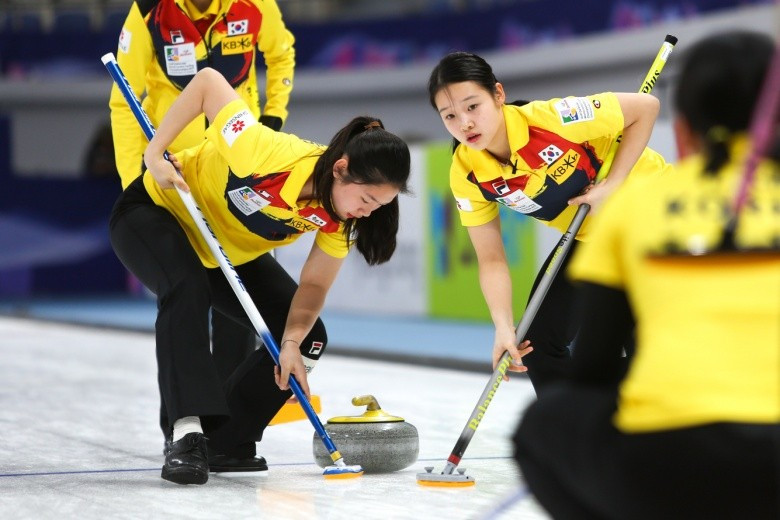 Tie-breaker matches will be required to determine who will stay in the hunt for medals in the World Junior Curling Championships women’s competition and also the last team to be relegated.

After the last round robin stage games were played today in the Gangneung Indoor Ice Rink, hosts South Korea and Switzerland finished tied for fourth place having won five games and lost four.

At the opposite end of the table, the United States and Japan will also face each other in a tie-breaker to decide who will join Hungary and Turkey in the World Junior-B Curling Championship after they ended the group tied for seventh with four wins and five losses.

Both clashes will take place tomorrow during the event which is acting as a test for the Pyeongchang 2018 Winter Olympics.

The hosts suffered a 4-3 loss against Russia, but their medal chances were kept alive by Switzerland’s failure to take advantage as they were beaten 6-4 by Sweden.

Russia also have five wins and four defeats from the competition, but have been eliminated due to having a poorer record than Korea and Switzerland.

Japan secured a 7-4 win over Hungary to give themselves hopes of avoiding relegation, which was boosted by the US' 9-3 loss to neighbours Canada.

Scotland and Sweden will meet tomorrow in the first-against-second play-off with the winners going through to the gold medal match on Saturday (February 25).

The winners between South Korea and Switzerland will meet Canada in another play-off.

Whoever wins that match will face the loser of Scotland versus Sweden for a place in the final, while the other team will head straight to the bronze medal clash.

In the men’s competition, a tie-breaker will also be required to decide who out of Norway and Canada will stay in contention for a medal.

Both finished the round robin stage with six wins and three losses.

Canada had started the day in second place, but a 9-8 loss to Scotland in the evening session saw them drop down to fourth.

Their opponents from today, who had earlier defeated Turkey 7-4, will now await the winners from the tie-breaker for tomorrow’s third-against-fourth play-off.

Norway got their slot in the tie-breaker after beating Switzerland 8-6.

Hosts South Korea finished the round robin stage with a 11-6 victory over Switzerland and will meet the US, who scored a 6-4 victory over China, tomorrow in the first-against-second play-off.

The day’s other results saw Sweden beat China 10-8 and Turkey win 8-2 against Italy.

Turkey, Italy and China are the three teams who have been relegated.

The men’s medals matches will take place on Sunday (February 26).