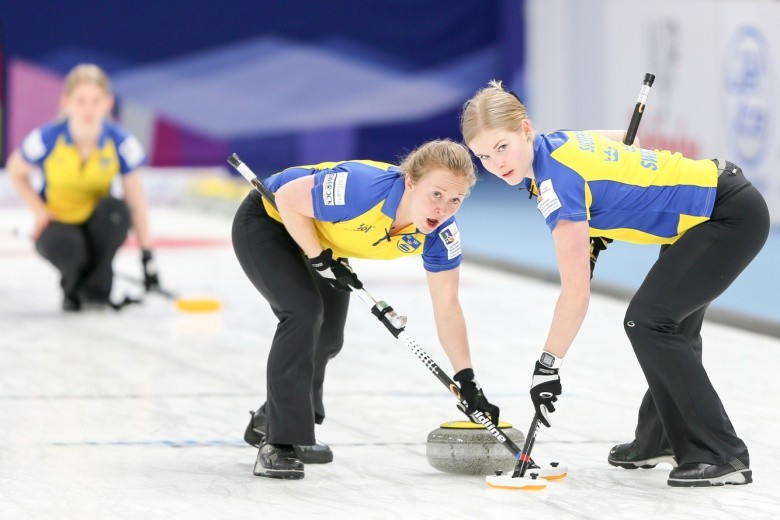 The round robin stage of the 2017 World Junior Curling Championships continued at the Gangneung Indoor Ice Rink today as three teams moved level at the top of the women's standings.

Canada, Sweden and Scotland are all on five wins and one defeat from their opening six matches.

Sweden moved to the top of the standings with a comfortable 10-4 win over Hungary in this evening's session.

"We like to go into every game and not feel like we are better than anyone else," Swedish skip Isabella Wranaa said.

"We always play the strategy against every team.

"I think we took our points in the right end in the beginning and then they stole one from us but we were still up two so we felt quite confident to have the game.

"But, still we needed to play good to continue on."

Canada opened the scoring in their game against Russia and led 2-0 after the opening two ends.

They held on to the lead for the entirety of the game and scored two and a single point in the fourth and sixth ends respectively.

They followed this up with a steal of one point in the seventh end before winning the game after the ninth end, where they scored a further two points to clinch an 8-3 success.

It was a mixed day for Russia, however, as they eased to a 10-5 win over the United States.

Japan suffered a second defeat of the day when they were then beaten 8-5 by Switzerland.

The Swiss team have now moved up to fourth in the overall standings after they also added an 8-6 win over Turkey to make it two wins from two today.

Hosts South Korea also collected a victory as they emphatically defeated the US 10-3.

There was only one men's session today in a competition which is serving as a test event for the 2018 Winter Olympic Games in Pyeongchang.

South Korea cemented their place at the top of the standings and maintained their 100 per cent record with a 9-3 win over Sweden.

Canada collected their fourth win from six matches with an 8-5 win over Norway, moving them into joint second place alongside the Norwegians.

Scotland and Switzerland, two of the three teams tied for fourth, were also both victorious today.