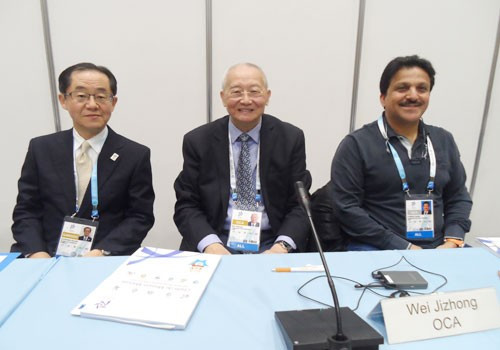 Tokyo 2020 have vowed to learn from the Asian Winter Games starting here on Sunday (February 19) as Japan seeks another opportunity to showcase its event hosting credentials.

This comes as the Olympic Council of Asia (OCA) revealed a record number of over 1,200 athletes and 32 National Olympic Committees are entered for the week-long event.

It marks a comfortable increase on the 26 NOCs and 843 athletes who featured at the last edition held in Almaty and Astana, Kazakhstan, in 2011.

Athletes from Australia and New Zealand participating for the first time as guest athletes partly, but not solely, explains the increase.

Kuwait will also feature under the Independent Olympic Athletes banner due to their ongoing suspension from the OCA and International Olympic Committee.

Ice hockey and curling preliminaries are due to begin tomorrow to mark the start of sporting competition.

It also marks an opportunity for Japanese organisers to test logistical aspects ahead of the 2020 Games.

“We would  like to send our best wishes to the organisers who will be able in the next eight days to showcase the best of what Sapporo and Japan have to offer," said Tokyo 2020 President Yoshirō Mori.

"World-class facilities, a centuries-old culture imbued with a modern and cosmopolitan spirit, as well as a unique Japanese kind of hospitality we call 'omotenashi'.

“For Tokyo 2020, the Sapporo 2017 Asian Winter Games offers the experts we are engaging in various fields, from transportation to medical services, media operations and venue management, an opportunity to gain valuable experience in advance of the Tokyo 2020 Games.

"For international delegations and sport fans, they will also offer a foretaste of the experience that awaits them at the Tokyo 2020 Olympic and Paralympic Games."

Japanese Olympic Committee President Tsunekazu Takeda added how the event also underlines the ever-important significance of the country on a global sporting stage.

“The event will showcase Japan’s dynamism to Asian countries and regions with focus on Sapporo - a city where people engage in international exchanges, embrace cultures different from their own, and continue to take on new challenges amid Hokkaido’s beautiful natural environment," he said.

"Asia is certainly gaining importance and presence in the sports world and has now become the most influential area in sport history.

"It goes without saying that the upcoming three Olympic Games are going to be held in this great continent.

"As the Tokyo 2020 Olympic Games coming up within three years with full of attention, the performance of athletes will create the 'power of sport' which delivers dreams, hopes and courage to the Japanese public."