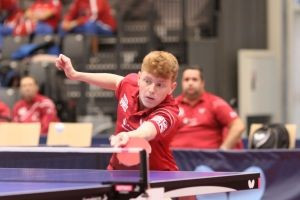 Tom Matthews and Billy Shilton have been selected for the British Para-table tennis performance squad for 2017.

The duo, who are both European Championship medallists, are the latest additions to the team, which now consists of 14 players.

Matthews joined the British pathway squad in 2013 and won the men’s doubles class one European team title in 2015 along with partner and fellow Welshman Davies.

The 24-year-old also claimed singles bronze at the competition in Vejle in Denmark.

Matthews missed out on qualification for last year's Paralympic Games in Rio de Janeiro as he was ruled out of the majority of 2016 with a broken leg, but he bounced back in style during his return to the table, beating Rio 2016 bronze medallist Ki Won-nam of South Korea to clinch gold at the US Open in December.

His reclassification meant he was unable to take part at Rio 2016 but he travelled to the Brazilian city as part of ParalympicsGB's inspiration programme.

"Both Tom and Billy have been selected for the performance squad because of the potential they have shown over the last two years," performance director Gorazd Vecko said.

"His performance in winning gold in Las Vegas in December showed that he will soon become a World top 10 athlete.

"I believe that Tom will be a future medalist for Britain in major championships and he is a great prospect for Tokyo 2020.

"Billy has been part of the programme now for the last four years and he has shown consistent improvement.

"He moved to Sheffield last year, which was the first big step for him towards joining the Performance squad, and now he has shown that he is a performance athlete and he understands what he needs to do to be a future medalist at the major competitions.

"He also played really well in the US Open at the end of last year and it is looking strong for the programme that we can take players from the pathway squad to the performance squad and this is how it should work.”