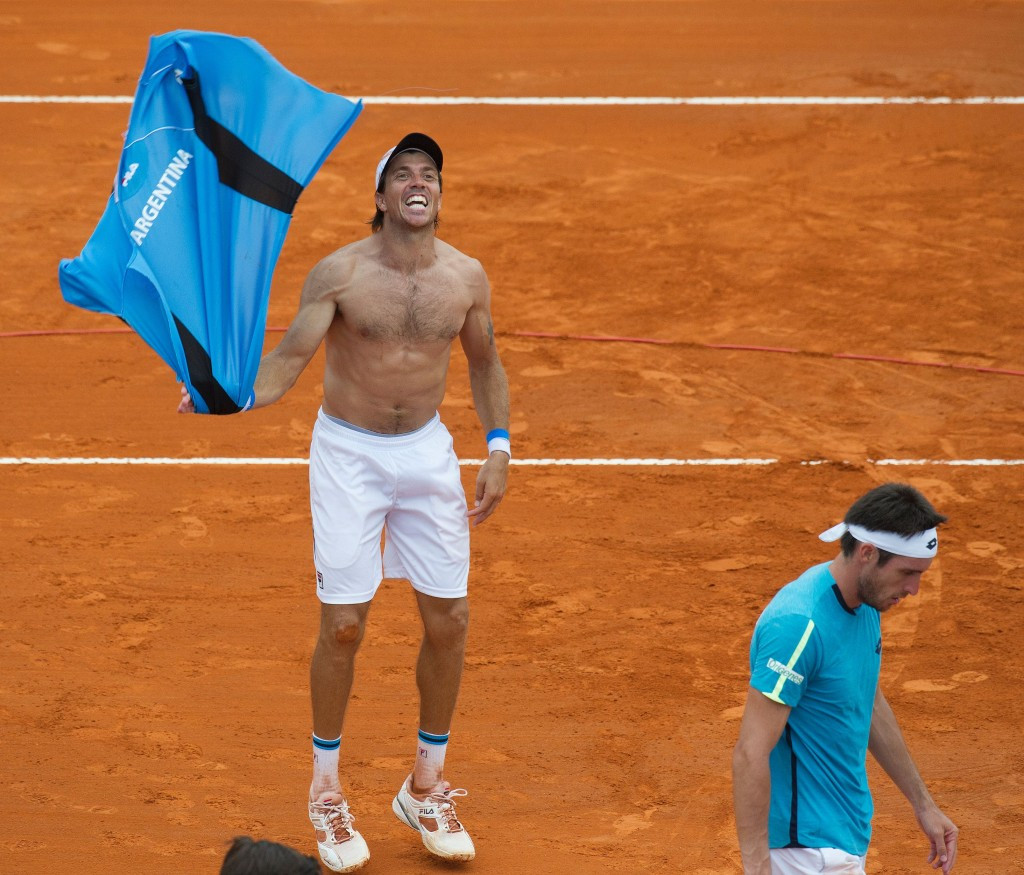 A lifeline was thrown to reigning Davis Cup champions Argentina as they won their doubles rubber against Italy today in Buenos Aires.

The visitors took a 2-0 lead into the third match of the World Group tie and knew another victory would confirm their passage to the quarter-finals.

However, after more than four hours on the clay court, Argentina earned themselves a stay of execution as Carlos Berlocq and Leonardo Mayer defeated Simone Bolelli and Fabio Fognini 6-3, 6-3, 4-6, 2-6, 7-6.

After the opening two sets, it looked as if a simple win was on the cards for the hosts.

However, Bolelli and Fognini raised their game in the third and broke when 5-4 up to wrap it up before storming the fourth.

A tense finish was assured when the final set went into a tie break after the Italians failed to take advantage of match points in the 12th game.

But with their fiery home support behind them, Berlocq and Mayer were the duo who held their nerve after both teams missed match point opportunities to final seal the win at the fifth time of asking for them.

It means Argentina will now have a chance to avoid becoming the 10th defending champions to fall at the first hurdle since 1972 when Berlocq takes on Paolo Lorenzi and Guido Pella faces Andreas Seppi in the remaining two rubbers.

In the other World Group matches, France were among the countries to ensure their progress as they took an unassailable 3-0 lead against Japan courtesy of a straight sets doubles victory from Pierre-Hugues Herbert and Nicolas Mahut.

Australia also earned their quarter-final spot as they went 3-0 up after Sam Groth and John Peers beat Jan Satral and Jiri Vesely.

Serbia have also earned an early victory with a day to spare Viktor Troicki and Nenad Zimonjic won their doubles rubber against Russian duo Konstantin Kravchuk and Andrey Kuznetsov.

Another country guaranteeing themselves victory were the United States, who are 3-0 up against Switzerland following Steve Johnson and Jack Sock's straight sets success against Adrien Bossel and Henri Laaksonen.

Great Britain, the 2015 champions, have taken the advantage in their away tie with Canada after Jamie Murray and Dominic Inglot saw off Daniel Nestor and Vasek Pospisil in four sets.

Last year’s runners-up are ahead in their match against Spain thanks to Marin Draganja and Nikola Mektic beating Feliciano and Marc Lopez.

The Zverev brothers Alexander and Mischa lost in Frankfurt to Belgium’s Ruben Bemelmans and Joris de Loore in five sets, meaning the tie sits at 2-1 to the visitors.