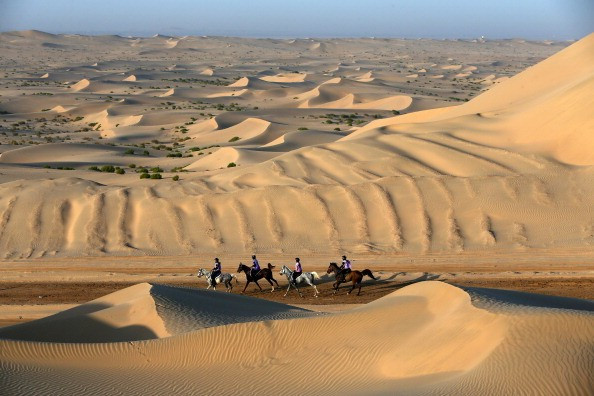 The International Equestrian Federation (FEI) have announced a series of measures aimed at addressing concerns over horse welfare in the United Arab Emirates (UAE) after revealing that seven horses have tested positive for banned substances.

The measures were also taken by the governing body following the death of seven horses in the past four weeks at events in the country, including at one FEI competition.

There will now be a requirement for stables involved in equine fatalities to provide full medical history for each horse and any medication administered, as well as details of the horses’ nutritional programmes and training schedules, including the methods used, the hours of training and distances covered.

A study will also examine each endurance course in the region, including a detailed assessment of track conditions.

Inspections will take place at all remaining endurance events in the 2017 season in the country, with an expert panel of course specialists and experienced veterinarians, including the FEI Veterinary Director.

Working directly with local Organising Committees to investigate equine injuries will also be carried out.

The FEI said there will be increased sanctions for those responsible for injury to horses, including imposing maximum permissible fines of €15,000 per offence and penalty points.

An expanded scope of individuals that can be held accountable will also be introduced, which will include trainers and veterinarians.

"I asked the UAE National Federation to urgently put in place measures that would specifically address the situation in the UAE and we welcome the speed with which they have responded to these very serious issues," said Sabrina Ibáñez, FEI secretary general.

"We have already expressed our concerns that the fatal bone fractures we are seeing in the UAE are possibly the result of over-training and are likely to be pre-existing injuries that haven’t been given sufficient time to heal.

"The studies that the FEI is undertaking and which will be first presented to the Sports Forum and then in more depth during the Endurance Forum in Barcelona on 23 and 24 May will help determine the causes so that actions can be taken to prevent similar tragedies in the future.

"The new senior management at the UAE National Federation, who met with the FEI President last month, is far more engaged and transparent than the previous administration.

"We are hopeful that, through their continuing cooperation with the FEI, together we will make dramatic improvements in addressing the causes of these injuries and the high levels of positives.

"This is something that needs to be done from the inside out and, while we can and will help from an educational perspective, there needs to be a willingness to improve from within and that now seems to be the case."

A session dedicated to risk factors and bone injuries will take place at the FEI Sports Forum in Lausanne during April, with the initial findings of the Global Injuries Endurance Study, conducted by Dr Tim Parkin and Dr Euan Bennet of Glasgow University, set to be presented.

Dr Chris Whitton from the University of Melbourne will also present on bone fatigue.

Ibáñez stated that if there is a clear consensus on immediate actions to be taken, she will propose the use of emergency procedures to speed up the implementation of new rules.

A series of meetings with trainers and team veterinarians will be hosted by the FEI in the UAE specifically to address the high level of catastrophic injuries in the region.

The seven doping cases, which were announced today, have come as a result of competitions at the Al Wathba venue in Abu Dhabi, with the positive tests occurring after four different endurance events.

Each of the horses tested positive for four prohibited substances: the stimulant caffeine and its metabolites theophylline, theobromine and paraxanthine.

Under the FEI Equine Anti-Doping and Controlled Medication Rules, caffeine, theobromine and theophylline are listed as controlled medication and specified substances.

The first two act as stimulants, while theophylline is used for the treatment of asthma and various respiratory diseases.

Paraxanthine, another stimulant, is considered a banned substance under FEI rules.

The first case came at a 120 kilometre ladies ride on November 26, with the horse Rafik de Kerpoint, ridden by Amy Louise McAuley, testing positive for all four substances.

The horses Castlebar Lightning, Intisaar and Mraseel were found with the same substances at a 120km ride on December 17.

Mraseel would also test positive for flumetasone, a corticosteroid which is used in the treatment of skin disorders.

The four substances were again detected in a sample of the horse Salam Banquetol, which was ridden to second place in the 120km event on December 24 by Abdulla Ghanim Al Marri.

The FEI have confirmed the seven athletes and trainers Ismail Mohd, Khalifa Ghanim Al Marri and Mohd Ahmed Ali Al Subose have all been provisionally suspended from January 30, when they were notified of the sanction.

All seven horses have been suspended for a two-month period.

It is not the first time concerns have been made in the UAE, with Dubai stripped of the hosting rights for the 2016 World Endurance Championships after the Emirates Equestrian Federation (EEF) was suspended.

The FEI announced the suspension due to "major horse welfare issues" in March 2015, but the sanction was lifted later that year, following the signing of a legally binding agreement in which the national body "guaranteed" horse welfare would be "fully respected" with FEI Rules enforced "stringently" at endurance events.

The governing body stated last April that there had been "hard work" and "progress" in the Gulf country but deemed that there is still too much work to be done to ensure horse safety at the World Endurance Championships.

Abdul Aziz Sheikh, the former head of the EEF Endurance Department, was suspended from acting as an FEI official or having any involvement in FEI activities at a national or international level for 18 months in March.

He was one of three officials sanctioned after "consistently" failing to address FEI rules, while five riders were suspended following "gross offences" last February.

Other allegations against the country included "ghost-registered" horses, with results duplicated from earlier events.