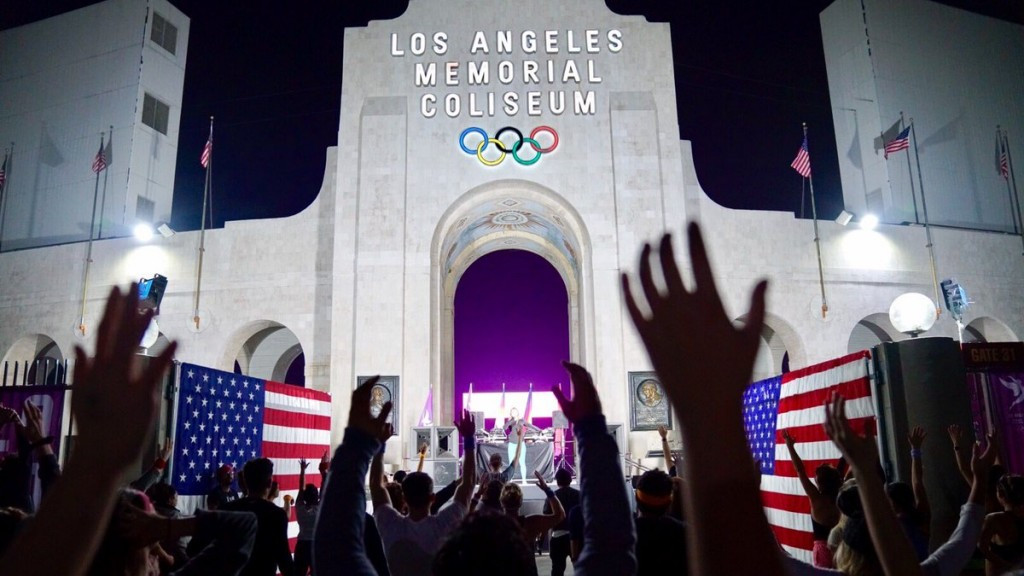 Los Angeles 2024 celebrated the submission of their third Olympic and Paralympic Games candidature file with a morning fitness session and party here today.

The “daybreaker” event was attended by over 600 people, as well as Bid Committee chair Casey Wasserman, vice-chair Janet Evans, who also serves as director of athlete relations, and chief executive Gene Sykes.

It involved a dawn workout followed by a rave-style party in front of the iconic venue, which was used during both the 1932 and 1984 Olympic and Paralympic Games.

A host of American Olympians and Paralympians also came to the event, including double Olympic 110 metres hurdles medallist Mark Crear and John Naber, a four-time gold medallist in swimming.

Gymnast Samantha Peszek, who won silver in the team event at Beijing 2008, and beach volleyball player Sinjin Smith were also in attendance.

The event, named the Morning of Champions by Los Angeles 2024, was described as an “exciting morning” by Wasserman, who added it showcased the unity and spirit of the city.

Jason Bentley, a well-known local DJ on radio station KCRW, provided the music in front of a dawn backdrop here.

Following the morning’s festivities, the logo of Los Angeles 2024 was projected onto the Pacific Wheel at Santa Monica Pier, where it will remain until midnight local time.

In the bid book, Los Angeles 2024 have claimed they will “increase opportunities” for all International Federations by “harnessing the strength of the California and United States markets”.

Wasserman has vowed to give athletes the “experience of a lifetime” at the Olympic Village, located at the University of California, Los Angeles (UCLA), with the Bid Committee stressing how their concept is athlete-centred.

The Los Angeles 2024 chairman also pointed to the fact that they do not need to construct an Olympic Village from scratch, considered one of the more expensive building projects in any Games bid.

“Los Angeles 2024 does not need to construct a single new permanent venue if we are given the honour of hosting the Games,” said Wasserman.

“That means we will have the luxury of two things many Organising Committees do not have: time and resources.

“So we can focus on the things that really matter, like creating personalised services to ensure athletes have the experience of a lifetime in our Olympic Village.

"We’ll spend the time and resources coordinating pre-Games training opportunities, developing a Games-changing digital Athlete Concierge, creating career transition programmes – and anything else the athletes of the world need to be at their very best when the biggest day of their lives arrives.”

Today’s event coincided with the submission of the third candidature file, which focuses specifically on "Games Delivery, Experience and Venue Legacy, and Los Angeles, along with Paris and Budapest, are now able to freely promote their bids internationally.

Budapest 2024 have postponed the launch of their international campaign, however, due to growing calls for a referendum to be held on their Olympic and Paralympic bid.

It comes at a crucial juncture in the 2024 race as the cities began to prepare for inspection visits by the IOC Evaluation Commission in April and May.

All three are also due to provide “informal presentations” at the General Assembly of the Association of Summer Olympic International Federations (ASOIF), taking place during the SportAccord Convention in Aarhus, Denmark on April 4.

Further presentations will be given at the Candidate City Briefing in Lausanne on July 11 and 12 and again at the decisive IOC Session in Lima, where a final decision will be made on September 13.