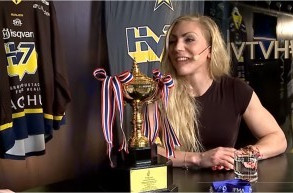 Muay Thai fighter Sofia Olofsson of Sweden has been crowned the 2016 International World Games Association (IWGA) Athlete of the Year.

The 28-year-old received 15,816 votes in the contest with second place going to speed sport climbing world champion Marcin Dzienski from Poland, who scored 12,499.

During 2016, Olofsson won gold in the 54 kilogram competition at the International Federation of Muay Thai Amateur World Championships in her home nation and also became the first woman to qualify for this year’s World Games in Wroclaw, Poland.

"It feels incredible to get so many votes," Olofsson said.

"I would like to thank all of the Muay Thai community and all of my supporters from Sweden and the rest of the world.

"I also thank the IMFA and World Muay Thai Council for standing behind me in this and promoting me on Facebook and Instagram."

Best team was won by dancers Gabriele Goffredo and Anna Matus after the Moldovan couple went through the year undefeated.