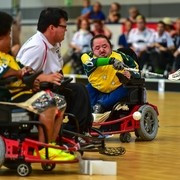 Czech Republic and Italy have been confirmed as the two bidders to host the 2018 International Wheelchair and Amputee Sports Federation (IWAS) Powerchair Hockey World Championships.

Site visits are due to be conducted in the potential host cities in the coming months, exploring the venues and team accommodation where the focus will be on the viability and suitability of the proposed facilities.

"The Sport Executive Committee look forward to meeting with the Local Organising Committees of both nations to gain a better understanding of their visions for the World Championships 2018," a statement on IWAS’s website reads.

Under its former name, electric wheelchair hockey, powerchair hockey was one of nine new sports or disciplines to apply for inclusion at the Tokyo 2020 Paralympics, only to fail to make it through to the final stage.

Only badminton and taekwondo were ultimately approved by the International Paralympic Committee Governing Board.